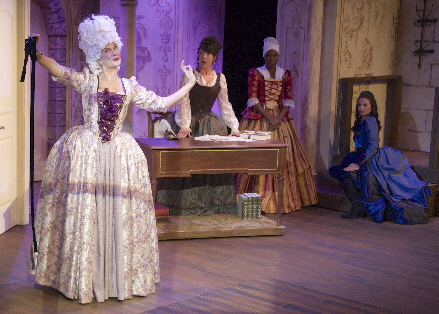 Mia Matthews, Niki Fridh, Candice Marie Singleton and Nicole Stoica are an odd foursome during the French Revolution in Lauren Gunderson’s The Revolutionists at Theatre Lab/ Photos by Amatista Photography

Theatre Lab’s production of Lauren Gunderson’s The Revolutionists resembles a blindingly scintillating gem-like puzzle with an infinite number of moving parts that twist in on itself over and over endlessly.

By turns it is drolly funny and affectingly poignant, then doubles back to satirical farce, then ends by bringing into stark relief the social commentary that it has been nurturing all night.

Admittedly, its intellectual content turns itself inside out so often and races by at a Brightline clip that many audience members will get lost or tired until the finale when Gunderson perfectly coalesces its seemingly disparate parts. But by that time, some weary people have wished the work had been trimmed a bit.

What keeps the audience going are some superb performances molded by director Matt Stabile in the Florida premiere of this work by Theatre Lab/Arts Garage/Florida Stage favorite Gunderson (I and You; Exit, Pursued By A Bear).

The outright comedy occurs in a Caryl Churchill surreal world in which female playwright Olympe De Gouges (who did exist) during the French Revolution is trying to write “an important play” that will be an outspoken declaration of the gender egalitie that the fraternite has not recognized in its revolution. But she wants a popular success and often suggests her plotting could be improved by making it a musical.

Her labors are interrupted by a friend Marianne Angelle,  a Caribbean spy seeking independence for her country and who wants her friend Olympe to divert her focus to writing political pamphlets. Their discussions swirl around the responsibility of artists to participate in curing ills in the real world. Then who should pop in but the fiery Charlotte Corday, wanting Olympe to write her last words she can use on the guillotine in the aftermath of her upcoming murder of Marat.

And finally, dropping in is a hilariously flighty Marie Antoinette who wants Olympe to create a lasting narrative of her life that will end differently than what she fears will happen or at least will cast her in a more positive light for posterity. She says impatiently, “I have precious little time to force history to like me.”

That last is one of several concepts that the women explore at a fever pitch. Is the fiction that artists choose to arrange then become reality for those who follow them? Corday says, “We’re all in a play that someone else is writing.”

The snappy dialogue is intentionally 21st Century with a gleefully blithe sprinkling of anachronisms and references to pop culture such as erroneously referring to Les Misérables as being set during the French Revolution,.

Insightful, intense, dense but very funny discussions about the intersection art, politics, feminism, social responsibility, sisterhood and storytelling spin faster than an out-of-control merry-go-round being operated by Tom Stoppard. Audiences can either invest deeply in following them or just ride the wave.

The most fascinating and humorous conceit is its triple meta experience, especially in the first act: We are watching playwright Gunderson’s play about a playwright writing a play about writing a play. You can either chafe or go dizzy trying to follow the internal permutations of self-referencing – or you can just savor the humor of the ever shifting patterns in the kaleidoscope,

Before going to the French Assembly to speak out against the misogyny of the revolution, Olympe says, “It never ends well unless you write the ending yourself.” Or early on when the quartet is together, Olympe says while brainstorming a plot, “Think of the power of a play that shows the entwined lives of real women.”

The humor subsides a bit in the second act as the guillotine claims lives, and Gunderson has some touching moments such as Marie and Marianne, separated by an abyss of classicism, bonding over the memories of dead husbands.

But, leaving the best for last, the actresses’ characters exude a vibrance and/or a passionate commitment that drives this evening when it sometimes feels too long and too convoluted.

Thinking Cap mainstay Niki Fridh’s Olympe is desperately trying to find the right balance between a commercial success and reluctantly being drawn into the potentially fatal battles in the real world. New Yorker Nicole Stoica creates a Charlotte who seems to have just walked off a bus in Queens but whose street-rough demeanor credibly co-exists with an unwavering commitment to her cause even knowing it will cost her life. Candice Marie Singleton’s Marianne is quieter and less fiery than the others, but believably committed to the revolution in her own homeland.

And then there’s Mia Matthews as Marie. She, if for no other reason, is cause to see this production. She won a Carbonell last year for her anguished mother in Zoetic Stage’s After. But she is just as breath-taking in her seamlessly fine-grained comic characterizations such as the recent role Island City’s Hir.  Among Matthews’ fortes is line readings with exquisite comic timing. Her vain pampered Marie is an outrageously entitled privileged royal with virtually no idea of the world outside the palace. Yet, and this is the other major accomplishment, she makes you feel sorry for her. There’s the sense of an innocent naif lost in the encroaching storm. It stands as one of the most skilled, hilarious yet multi-dimensional comedy performances of more than one season.

Matthews will be replaced near the end of the run by Autumn Kioti who just finished a stint as an aggressive amoral attorney in Zoetic Stage’s Wrongful Death and Other Circus Acts.

The Revolutionists  from Theatre Lab runs through Feb. 25 on the first floor of Parliament Hall, FAU Boca Raton campus, 777 Glades Road. Performances are Thursday through Saturday at 7:30 p.m., and Sunday and Saturday, at 3 p.m. Running time 2 hours 10 minutes with one intermission. Tickets are $35. Call 561-297-6124, visit the FAU Box Office or https://www.fauevents.com. Tickets available at the door upon availability.