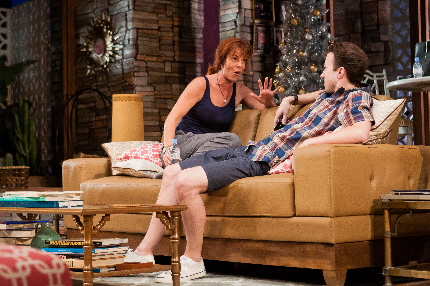 All through the engrossing and ultimately wrenching second act of the Maltz Jupiter Theatre’s production of Other Desert Cities, one question screamed for an answer: Where were you people in the first act?

Not that anyone was giving a less than competent performance in the first half, but the actors failed to create persuasively realistic human beings while slogging through the endless waist-deep muck of exposition that playwright Jon Robin Baitz mired his characters in.

This did not seem the case at all in the Broadway production in 2011 nor the one at Actors Playhouse in Coral Gables last season.

But here every other sentence in the first act seemed more about delivering information to the audience than creating a recognizable troubled individual. In other productions, the audience quickly realizes that something is simmering under the surface beyond Baitz’s premise that a writer is about to publish a book exposing her family’s darkest period. There also was a sense of controlled fire and steel wills and deeply buried secrets. But not in the first hour of this edition.

Conversely, once all the relationships are drawn and the backstory is laid out in the first act, the actors in the second act suddenly inhabited the characters and convincingly explored the yin and yang emotions and dizzying family dynamics. All five actors shone with such a vividness and plausibility that their absence in the first act becomes all the more notable.

The Pulitzer finalist script is a symbiotic meld of family dysfunction and analysis of how modern American politics poisons our humanity. If that alloy seems a little forced, Baitz keeps the audience captivated with a constant swirl of ideas and glimpses into the mechanics of an articulate and complicated group of people bound by a time-tested if prickly love. Both Baitz and this cast under Peter Flynn’s direction excel at creating that sense of an emotional bond through a generous sprinkling of arch witticisms and pleasure at referencing shared experiences.

The story focuses on the Wyeth family, wealthy establishment Brahmins from the country club set based in a Palm Springs ranch house. They refer to “Nancy and Ronnie” without making it sound as if they are dropping names. At their head is white-haired eminence Lyman (Richard Kline), a former film actor turned political powerbroker, now a distinguished-looking retiree; and the brittle witty Polly (Susan Cella), a former screenwriter turned country club doyenne and elegant consort.  The curtain rises in 2004 when they are hosting the family to a secular Christmas, since they are cultural Jews.

In for the weekend are the children Brooke (Andrea Conte), a thirtyish writer whose one successful novel was followed by a massive nervous breakdown, and younger brother Trip (Cliff Burgess), a sardonic producer of a Judge Judy type reality show. Filling out the card is Polly’s sister Silda (Angie Radosh), also a former screenwriter who is drying out from just the latest relapse of habitual substance abuse. Baitz treats us to entertaining family banter, the good-natured teasing and jibes indicative of a tight family unit.

The real reason for the reunion is that Brooke has finished a new book and wants her parents’ blessing before it is printed. But the work is a memoir centering on the family’s old nightmare: The oldest son Henry, rebelling against his parents’ rock-ribbed politics, joined a group during the Vietnam War that he did not realize planned to bomb of an Army recruiting center – an act which subsequently kills a homeless vet. Brooke recalls that a distraught Henry sought understanding from his parents but was spurned by them and later disappeared off a ferry after leaving a suicide note.

Her parents, now pillars of the establishment but retreating into retirement, are beyond conflicted about the book. Polly aggressively and antagonistically rejects resurrecting the pain and the social shame that she has battled back from once already. Lyman, a former ambassador for Reagan, conciliatorily wants to support his daughter but doesn’t even want to read the manuscript. Silda, who hates Polly’s politics, is cheering on Brooke; Trip just wants there to be peace and hates being the neutral party whose heart and mind is being recruited by both sides. But this book is a resurrection for Brooke’s soul as well as a tribute to her beloved older brother.

These brief sketches do not capture the curlicues of conflicting motivations forced into the open by the imminent publication. Baitz depicts seemingly disparate personalities who he slowly reveals share a laundry list of paired traits: weakness and will, love and antipathy, thoughtfulness and thoughtlessness, consideration and cruelty, courage and cowardice, passiveness and aggressiveness.

But a devastating truth emerges late in the show that forces the audience to recalibrate everything they think they know about this group. Seeing this show for the third time and having read the script twice, a couple of things come clear. One is that Baitz has illustrated how people we pigeonhole are far deeper than they seem and, two, that he has just invalidated the first 85 percent of the play.

Other than the exposition problem, director Flynn has elicited some good work from the cast, especially in the final half-hour. He also excels in textbook staging in which the placement and movement of people silently underscores their relationships and the drama occurring on stage.

Conte, who was so fine as the unfaithful wife in Arts Garage’s Gloucester Blue, has the linchpin role. Again, she’s not convincing unloading backstory while making Brooke a three-dimensional creature. But after intermission, Baitz has given her red meat to work with and she is absolutely up to the challenge, especially in a long aria in which she agonizingly makes up her mind whether to publish or not.

Cella is clearly a solid actress with talent and technique. Her carefully coiffed Polly plausibly harbors such a strange stew of interior forces at war with each other. For instance, Cella makes credible Polly’s unshakeable devotion to caring for Silda while simultaneously despising Silda’s weakness. It’s absolutely unfair to compare performances, but I missed the tough-as-titanium and almost cruelly judgmental qualities that her predecessors have infused in the part.

Easily one of the best actresses in the region (e.g. her Queen in Palm Beach Dramaworks’ Exit The King), Radosh can simply do no wrong. But this edition of a blowsy self-destructive truth-teller wasn’t as compelling as others we’ve seen, not in the league with her alcoholic sister in Dramaworks’ A Delicate Balance.

Kline looks the part and puts across the faded charm that his matinee idol used to get along in the social world of GOP politics. His go-along-to-get-along Lyman has spent a lifetime trying to negotiate and ameliorate rather than face challenges forthrightly.

Burgess (wonderful in Arts Garage’s Lungs) has a tough part in Trip who is written  especially passive-aggressive. His Trip tries desperately to be an observer in what he sees as a no-win conflict. When Trip is forced into the fray, Burgess makes Trip’s opinions credible even though they range all over the place from pragmatism to tough love to supportive to critical.

As so many patrons remarked upon entering the auditorium, Anne Mundell’s set design of the flagstone living room was stunning, lit by Cory Pattak. Like its owners, it is elegant and tasteful but frozen in the 1960s down to the chandelier that looks like an exploding atom. Wade Laboissonniere’s costumes are equally dead perfect mirrors of character and class from Lyman’s tennis whites to Brooke’s studied informality to Polly’s stylish couture outfit that passes for casual at the country club dining room.

The Maltz’s choice of this play carries a bit of unintentional irony because to some degree the characters and their milieu are a mirror of a significant segment of the Maltz audience.