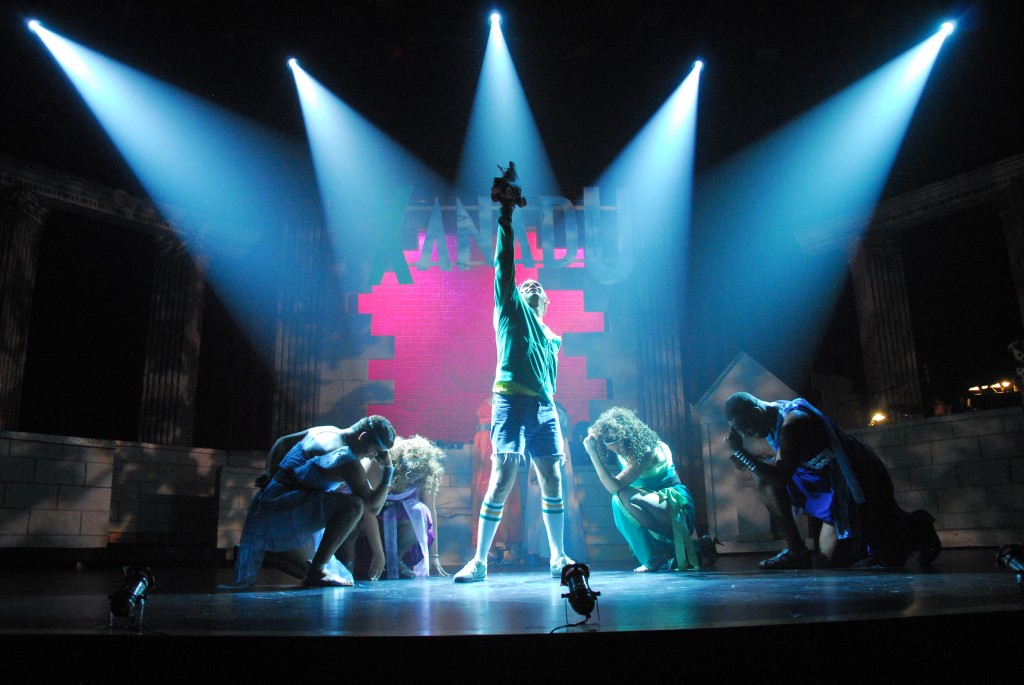 The fetching heroine clumps around the stage with a roller skate on one foot and an Ace bandage on the other. The artist hero rhapsodizes about his dream to combine all the art forms in the apex of creation: a roller disco.

Director Patrick Fitzwater warned the opening night audience that this is “thinkless theater at its finest.” Well, maybe not at its finest, but this dopey 90-minute spoof of the 1980 flick starring Olivia Newton-John and, for his sins, Gene Kelly, regularly elicits smiles, chuckles and some flat-out guffaws.

To be truthful, this is not among Slow Burn’s best work. The company was far funnier, crisper and engaging in Urinetown earlier this year, another spoofy satire. This is more the ragged romp you might find at a theater summer camp for some really talented kids. But it would take a congenital curmudgeon not to acknowledge that the company is having so much fun – and working pretty hard to entertain – that their enthusiasm is incurably infectious.

The star of the show is book writer Douglas Carter Beane (The Little Dog Laughed and As Bees In Honey Drown). He told critics while writing the show that he took the job on the producer’s condition that he keep the songs and on his condition that he could scrap 95 percent of the film.

He started with the film’s basic premise: the Muse Clio comes to Earth to inspire the artist Sonny in Venice, California, and, of course, falls in love with him despite Zeus’ orders. Together, they renovate an abandoned nightclub, Xanadu.  Beane injected far more Greek mythology and stole liberally from 1981s’s equally silly Harry Hamlin epic Clash of the Titans. If the musical Rock of Ages celebrated the excess of the decade, Beane’s Xanadu affectionately venerates its shallow mindlessness. He peppers it with camp digs that pre-date much of the cast’s birth such as mentioning heartthrob actor Parker Stevenson and Mr. T’s catchphrase “I pity the fool.”

Fitzwater and Beane’s style of choice is at least two levels above over-the-top. The book is intentionally clichéd and clunky to make fun of the shortcomings of clichéd and clunky books, such as ham-handedly troweling on implausible exposition. The heroine in the film was played by Newton-John whose Greek Muse inexplicably had an Australian accent. Beane acknowledges that by positing  that Clio obeys Zeus’ command that she work incognito on Earth, so she “disguises” herself by taking the name Kira, wearing legwarmers and adopting a Crocodile Dundee accent.

Beane and Fitzwater have profligately crammed in scores and scores of meta-referencing lines and bits of business that tickle, especially if you’re a movie geek or Xanadu-head. For instance, the character played in the film by Gene Kelly enters the stage, apropos of nothing in the plot, jauntily carrying an open black umbrella and whistling just the first four notes of “Singing in the Rain.” Blink and you miss it.

Or when a character is referred to as actress Maggie Smith (too complicated to explain here) she responds, “Assassin! Assassin!” which is Smith’s exit line in her Oscar-winning turn in The Prime of Miss Jean Brodie. Very funny. Very esoteric. Two of us in the auditorium laughed.

Or when Clio and her eight sister Muses disappear, Sonny says, “People come and go so quickly here” — Dorothy’s reaction to the exit of Glinda in… well, you know. As one character quips, this is “like children’s theater for 40-year-old gay people.” 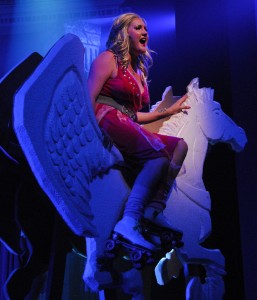 The cast is headed by Slow Burn’s regular leading lady, Lindsey Forgey, wearing a wig of flowing blond curls. Forgey is a lovely woman with a strong voice, but she is as visually as far from the waifish Newton-John or Broadway’s Kerry Butler as you can get. Being a comedienne, she revels in that. In five Slow Burn roles, she has perfected an off-center heroine whose slightly loopy, slightly at sea persona skewers the unrealistic dewy-eyed naifs who Hollywood usually casts in these roles. Watching her Muse galumph across the stage without one skate, gamely pretending that she can ignore the impediment, is a solid hoot.

Her love interest here (and in Slow Burn’s earlier Bat Boy) is Rick Pena whose expression is always slightly dazed and confused. But he has that earnestness that delivers the humor in lines like “You make me feel so incredible, I feel I can go into downtown L.A. without a weapon!”

Larry Buzzeo, another member of Slow Burn’s loyal stock company of actors and designers, recreates one his urbane world-weary George Sanders characters as the owner of the dilapidated club and one of Clio’s amorous conquests on a visit during the 1940s.

The Greek chorus of Muses – including Lisa Kerstin Braun, Jerel Brown and Kristina Johnson – all are having a great time. Attention must be paid to Conor Walton’s tap dance as Buzzeo’s alter ego in a dream sequence, which has more precision and polish than everything else in the show. 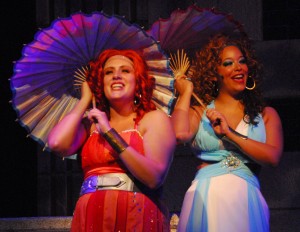 If most of the show lacks electricity, the amperage suddenly shoots off the meter with every appearance of Renata Eastlick as one of two malicious Muses trying to sabotage Clio. Tall, gorgeous, sexy and full-voiced, she rips out songs like “Evil Woman” with enough topspin to melt the varnish off a billiard ball, especially when she’s partnered with fellow Muse Mary Gundlach, who was superb as the Witch in Slow Burn’s recent Into The Woods.

The on-stage house band led by musical director Manny Schvartzman lovingly recreates the era with such Jeff Lynne and John Farrar “classics” as “I’m Alive,” “Magic” and the Newton-John standard “Have You Never Been Mellow,” which has never sounded campier. Still, Schvartzman has let the singers get awful sloppy about hitting some notes and their enunciation.
The overall evening is not as consistently hilarious as Slow Burn thinks it is, but if you surrender to humor much broader than the Intracoastal, you’re likely to find yourself having just as much fun.