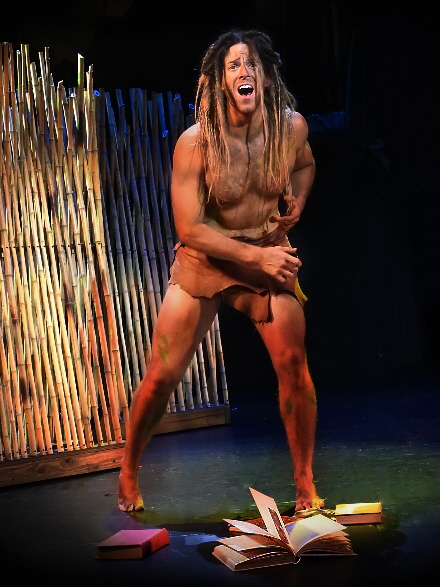 Tarzan: The Stage Musical, by regional theater troupe Slow Burn Theatre plays just fine in the smaller, almost 600-seat Amaturo Theater at the Broward Center for the Performing Arts, but, truth be told, it could have easily passed for a touring road show version that’s usually on stage next door in the more than double-the-size Au-Rene Theater. Yes, it’s just that good.

Disney adapted its 1999 animated movie version of Tarzan for the Broadway stage, where it opened in 2006. But Slow Burn director/choreographer Patrick Fitzwater was faced with a challenge. This was one of those over-the-top production musicals meant to play in a big house.

Slow Burn took Tarzan, and made it their show, most especially by how the production uses the smaller theater to great advantage. Where the Broadway musical calls for big theatrics and production, taking the excessive route could have made this show overwhelming in the less expansive space. But there’s a delicate balance the company has created by keeping the “wow” factor intact, but also concentrating on characters, both ape and human. Look past the swinging ropes and you’ll find that Slow Burn’s Tarzan brings a deeper emotional layer to the beauty and the beast-esque love story of an ape man and the woman who sees beyond his wild ways.

Yet, there’s no denying this show’s technical demands. The theater company that began at West Boca Community High School in 2010 continues to challenge itself in this respect (refer to last year’s Titanic). The company’s production of the Disney musical seems to seamlessly zip from one end of the West African jungle to another, but, make no bones about it, there are tall, technical feats that are achieved. Most noteworthy are swinging ropes, with actors attached to harnesses. There’s the transition of a young Tarzan’s swing from a rope offstage, only to have an adult Tarzan enter in his place, and the ability to immerse the audience in the world of Tarzan’s jungle (hats off, as always, to Michael McClain’s environmental scenic design). Add to the list the grace and drama of a fight scene between Tarzan and the dastardly leopard (Jonathan Eisele). None of which are easy feats.

Fitzwater manages to get some showy acrobatics out of the chorus of dancing apes (the hardworking ensemble of Victoria Anderson, Nicole Kinzel, Kyle Ashe Wilkinson, Jerel Brown, James Giordano, Emily Tarallo, who is also dance captain, Shenise Nunez, Sahid Pabon, and Casey Sacco). The choreography is simplistic in some respects, but he manages to get the most out of his troupe of dancers. No doubt the director/choreographer could have fashioned more intricate moves with seasoned dancers, but there’s never a missed beat here, so, only for the purposes of theater critique is this even worth a mention.

The director has instilled his choreographer’s acumen into the movements of the actors, too. The ape family’s movements are entirely genuine, and much in contrast to the human characters. Take note as this adds yet another element of authenticity to this production.

There are standouts aplenty in this cast. Shonda Thurman’s deep emotion as protective mother, Kala, who loses her own baby only to turn her maternal instincts to a human infant she finds in the woods, is wonderfully warm. Bring out the tissues for her tender “You’ll Be In My Heart,” recognizable from the 1999 Disney animated feature, and its still popular radio play. Phil Collins’ song held a spot on the Top 25 of Billboard’s Hot 100 chart that same year. Collins wrote five songs for the 1999 movie, but expanded on his score here.

Dante J.L. Murray as Kerchak, the strong leader of the tribe, is finely played as a stern and stark contrast to Thurman’s emotive, Kala. Disney’s typical comical sidekick Terk, flamboyantly fun Darius J. Manuel, brings out  Terk’s, inner diva in the song “Who Better Than Me.”

Ten-year-old Christo Joseph Amygdalitsis commands the stage as Young Tarzan in his Act 1 solo, “I Need To Know.”

For the demanding role of Tarzan, Natale Pirrotta is a crowd-pleaser. His Tarzan is a naive man-child who knows there’s a secret in his past, and, wants to learn the missing pieces. And Pirrotta has the right pop voice for Collins’ songs, and the looks to make you think girls might swoon for his rock-star appeal.

Everything in this show ratchets up a notch with the arrival of Lindsey Corey as Jane, near the end of Act 1. The properly buttoned-up Brit has some of her own unleashing to do, and Corey’s wily timing shows audiences that the introduction to Tarzan could be just the ticket. When she tells the audience she’s had “quite an exciting day” after being rescued by a naked man, there’s a glimmer of naughtiness that’s absolutely fetching. Sparks fly between Tarzan and Jane in Act II, and it’s due to the chemistry between the two actors, Pirrotta and Corey.

Michael Kreutz as Porter, Jane’s mad scientist father, adds a dose of daffiness, and Michael Cartwright’s Clayton is perfectly sinister. Thomas Porat and Christopher Alvarez round out the cast.

Rick Pena’s ape costumes stand out for their ability to move along with the actors who inhabit them, and with his willowy Victorian-era dresses for Jane. Thomas Shorrock’s lighting is bright, warm, and sunny for most of the action, reflecting the vibrancy of the African jungle. The sounds of the jungle by Rich Szczublewski add to the immersive experience.

Kids will enjoy Slow Burn’s Tarzan, and you’ll see a few wee ones in the audience, especially at matinees. Kudos to the cast for not letting the shrieks and cries from tots distract them. However, adults shouldn’t shy away from this Tarzan; the production values put this on a higher caliber than mere children’s theater, for sure. In fact, this swinging Tarzan has so much going for it, it is a shame it doesn’t have a longer shelf life. Slow Burn should pick this up and take it on the road.

Tarzan: The Stage Musical presented by Slow Burn Theatre Company through Nov. 5 at the Amaturo Theater, Broward Center For The Performing Arts, 201 SW 5th Ave., Fort Lauderdale. Performances are Thursday through Saturday at 7:30 p.m., and Sunday at 2 p.m. Running time about 2 hours 20 minutes including one intermission. Tickets are $47-$60. Call (954) 462-0222 for tickets, at www.browardcenter.org or #Ticketmaster.com; in person at Ticketmaster outlets or the Broward Center’s Auto Nation Box Office. Info at www.slowburntheatre.org