Summer Shorts Is, As Usual, A Daffy, Uneven, Goofy Smile 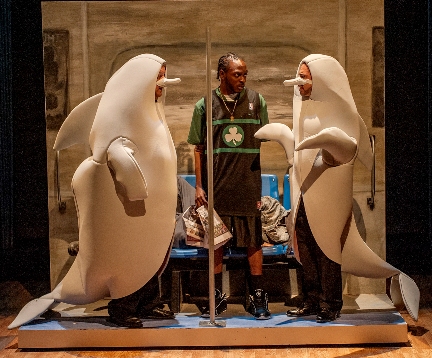 Sometimes for actors, especially playing comedy, the only option is to jump off the cliff and see if you can fly. The miracle is that sometimes, as in City Theatre’s Summer Shorts, is that, indeed, they soar.

These actors, directors and their creative team fearlessly leap into the void with bizarre story premises and over-the-top performance choices that usually result in power dives, barrel rolls and loop-the-loops.

See the demented look in Todd Allen Durkin’s eyes as a closeted refugee from Santa’s workshop seeking feedback from his writing teacher on his autobiographical homework assignment. Actually, just reread that sentence.

Watch Renata Eastlick go increasingly bonkers as she quintuple-guesses how her options of choices of food at a restaurant might influence how her date might think of her.

And without giving anything away, wait for the sight of Ken Clement leaning against the bars of a cage nonchalantly filing his nails. Trust us.

This 18th edition of short new comedies performed by a repertory troupe scores as one of the series’ stronger entries in recent years. Certainly, some works are far stronger than others and, as always, most of them still need rewriting and tweaking. Consistency has never been a Shorts hallmark. But not a single sketch this year is a head-scratcher, a problem that has dogged the festival most seasons. Most are diverting, pleasant sources of chuckles and guffaws.

Even the obligatory “serious” playlet, the slot that most often went wrong in the past, is effective. This one centers on a teenager refusing to come out of her room because she hides a secret.

The short play form is like uncut cocaine to wannabe and experienced writers, but it is deceptively difficult to pull off. Most writers come up with an intriguing premise, but stumble creating engaging characters or a plot arc with a beginning, middle and an end. Especially an end. It’s what separate a short play from the half-baked sketches by the lazy hacks on Saturday Night Live.

Once again, City Theatre benefits from a cadre of skilled directors and actors with a feel for the daffy and droll groove. The cast roll includes Durkin; Eastlick who is moving to New York City; Clement; Shorts mainstay Irene Adjan; indie theater vet Rayner Garranchan and newcomer Vera Varmalov who starred in Mosaic’s The Birds.

The directors this year include John Manzelli, now in his third season as City Theatre’s artistic director; acclaimed freelance director Margaret M. Ledford; Antonio Amadeo, co-founder of The Naked Stage, and Mcley Lafrance, an actor and director who also serves as production manager with Natalie Taveras.

It may not be fair to single out a member of such a solid ensemble, but notice is required of Durkin. He may be better known for dramatic work such as Blasted and A Steady Rain, but he’s been enjoying quite a run of comic roles the past season or two. He and Clement just finished torturing each other as the over-the-top golf club owners in Actors Playhouse’s The Fox On The Fairway. Durkin also nailed the drug-dealing firefighter in Zach Braff’s hoot All New People at Zoetic Stage. What all of his roles, comic or dramatic, are built upon is the furnace of intensity that allows him not just to jump off that cliff but to ignite some internal afterburner. He and Clement both find off-beat but completely believable line readings that inject an extra element of credibility into whatever character they are playing.

A tour of the evening:

In the opener, iZombie by Kendra Blevins, a 21st Century boy-meets-girl story, two Millenials whose lives have been cemented to their iPhones (Garranchan and Varmalov) accidentally meet and try to establish a relationship by actually talking to each other face to face. It’s a modestly wicked satire in which Varmalov’s friend (Eastlick) shoots Garranchan’s photo in person with her phone without ever seeing him and has to look at the photo to realize that he’s good-looking. 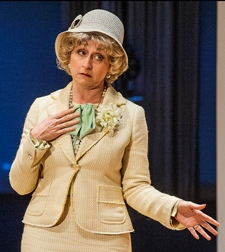 The Gay Agenda by Paul Rudnick (of I Hate Hamlet and Jeffrey) is one of funniest and most polished pieces. It’s a speech delivered by the pearls-and-suit homemaker Mary Abigail Carstairs-Sweetbuckle who is alarmed by the encroaching ubiquity of homosexuals. For instance, all the sassy wisecracking sidekicks to women characters on sitcoms are gay men. “It’s taking jobs from black women!” she wails. Confronted with two lovely young men who moved in next door, Sweetbuckle begins to come unhinged as she hears a caustic voices insinuating “the gay agenda.” Adjan is absolutely hysterical as Sweetbuckle’s equanimity erodes under the onslaught of the voices. This edition is even funnier than when the piece was presented a year ago as part of City Theatre’s Standing On Ceremony: The Gay Marriage Plays.

Please Report Any Suspicious Activity by Rick Park is a Southeastern premiere in which Clement and Garranchan are two dolphins (in Ellis Tillman’s hilarious costumes) squabbling in a lover’s tiff as they ride the subway to the aquarium. The deadpan reaction from a commuter (Shorts intern Jovan Jacobs) that two arguing dolphins is just another day on the train is what makes the whole thing work.

The world premiere Departure by Holly Hepp-Galvan is the one “serious” entry and a finalist in the 2012 City Theatre National Award for Short Playwriting. It depicts a 13-year-old girl (Varmalov) who refuses to come out of her room for Thanksgiving dinner, despite the entreaties of her mother (Adjan) and her visiting aunt (Eastlick). There is something about her physical appearance that she is terrified to reveal in public, something she feels makes her a freak. When her aunt discovers it, she sides with the girl’s desire to have the “thing” removed, but her mother clearly feels that it is not a curse but something that makes her unique and special. This metaphor for every teen’s angst works well, although even with a dramatic ending, the play doesn’t quite seem to directly resolve itself.

The Student by Matt Hoverman, a Southeastern premiere, is probably the funniest piece of the night thanks to Durkin as the besotted writer who pens a tale “Simon The Gay Elf” and to Clement as the overworked, discouraged creative writing teacher. A shade long, but these two actors working under Amadeo kept the laughter coming.

Feel the Tango, a world premiere by City Theatre co-founder and literary director Susan Westfall, ended the first act with a cute if not unexpected tale of a boring couple (Clement and Adjan) whose weekly dinner out becomes energized thanks to the fiery, passionate attentions of Latin waiters Garranchan, Eastlick and Varmalov.

Serendipity by Steve Yockey, commissioned by City Theatre, is a goof on noir movies. The entire cast plays a group of strangers who randomly meet on a foggy street one night in what devolves from Dashiell Hammett territory to Eugene Ionesco surrealism. Ledford succeeds in creating the off-kilter atmosphere.

The Favor by Leslie Ayvazian, whose work has been done by New Theatre, has a snow-bound couple wrestling with the limits of what loved ones ask of each other. In this case, a wife (Adjan) asks Durkin to do a favor for her mother dying in the next room.

The world premiere Bite Me by Nina Mansfield, finds a harried businessman Durkin coming home to his slick and superficial “Real Housewife of Orange County” Varmalov who has figured out a way for them to live together for eternity thanks to the talents of a visitor played by Clement.

A Tall Order by Sheri Wilner is that manic tour de force for Eastlick under Lafrance’s direction in which a woman is about to order dinner with Garranchan when she stops time. She then mentally goes through every entree option on the menu. She and Garranchan act out how she thinks each choice might play out later in their relationship. This script was a finalist for the 2012 City Theatre National Award for Short Playwriting.

Oddly, the weakest piece is the one with the most promising single-sentence concept and unfortunately comes at the end of the evening. Mothra vs. the Casting Agent, An Allegory is a world premiere by David Bar Katz that finds the down on his luck movie monster (Clement in the funniest of Ellis Tillman’s costumes) begging for work at an audition for a haunted house movie. Great idea; goes nowhere.

In describing the plots, some sketches seem a lot thinner in the telling which means a good deal of the praise is due the actors and directors. All of the works except Rudnick’s could use a good dramaturg.

Credit also is due to the squad of interns, who not only move furniture and help actors dress, but often have small but crucial parts in the scenes: Rachel Chapnick, Stephanie Meskauskas, John Forelich and Jacobs.

The basic set is a sleek art gallery with paintings or posters on its white walls that reflect each of the playlets, the creation of Jodi Dellaventura, one of best prop mistresses in the region. Melissa Santiago-Keenan provided a morphing lighting design. Sound designer Matt Corey enlisted his father, the veteran actor Dave Corey, to provide the unctuous but mellifluous voiceover narration of an audio guide to the gallery as the introduction to each sketch.

Despite its flaws, Shorts will likely result in a wry smile on a summer night. 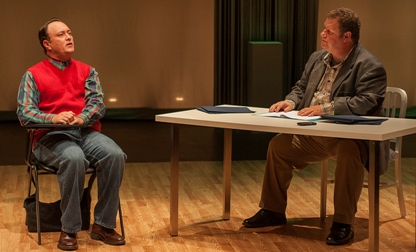 Todd Allen Durkin gets some writing advice from Ken Clement