Posted on September 2, 2014 by Bill Hirschman 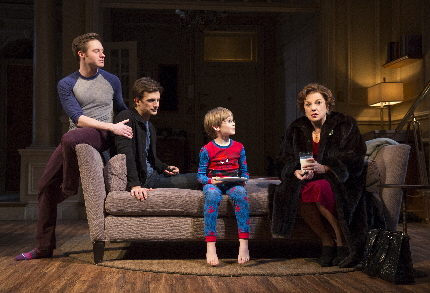 Broadway production of Mothers and Sons

In chronological order, here is a highly subjective, personal list of the shows whose titles or concepts we most want to see this season. To see our full season advance, click here. To see the full calendar, click here.

—Mothers and Sons (GableStage, Sept. 20): On Broadway, a strong cast and a stimulating script resulted in a topical, incisive and emotionally touching play about a homophobic mother visiting her dead son’s lover.

—Our Town (Palm Beach Dramaworks, Oct. 8) Don’t laugh. Yes, it’s been done by every high school and community theater in the country— and they almost always disappoint because it takes considerable experience, art and craft to succeed in what is supposedly a transcendent experience. But if anyone can, Dramaworks can.

—Carrie (Slow Burn Theatre Company, Oct. 16): On the positive side, it’s got a really strong cast and a proven director and a heavily rewritten script after its legendarily flop productions in the past, plus we trust Slow Burn’s taste. And honestly, haven’t you always wanted to see what this is like?

—The Foreigner (Maltz Jupiter Theatre, Oct. 28): Done well, this is one of the funniest comedies after Noises Off.

—My Old Lady (Dramaworks, Dec. 3) Any time, any time you can see Estelle Parsons read the phonebook, it’s worth a ticket. Partnered with Angelica Page (neé Torn) and a script by the prolific master Israel Horovitz, this is likely the don’t miss ticket of the season.

—Othello (Outré Theatre Company, Dec. 5): Shakespeare is the Achilles heel of South Florida theater. But director Christina Groom (a solid Shakespearean actress herself) and a promising cast of Troy Davidson, Skye Whitcomb and Faiza Cherie transported to 1950s Cyprus make this one we’ll gladly go into with our fingers crossed.

—The Wiz (Maltz, Jan. 13): I just love the score and Andrew Kato is promising as director to deliver a unique vision including puppets.

—The Assembled Parties (Plaza Theatre, Jan. 15): Cast right, directed right, Richard Greenberg’s script comes off well all the way through, but its last half-hour delivers a rarely achieved emotional and intellectual wallop of bittersweet pungency that you don’t feel often.

—I and You (Theatre at Arts Garage, Jan. 16): I chaired the national American Theatre Critics Association/Steinberg New Play Award committee that gave our award to this play by Lauren Gunderson based simply on the brilliance of the script. Now I get to actually see a production about these two high school students working on a project about Walt Whitman – a comedy that ends up a profound meditation of life.

—Les Liaisons Dangereuses (Dramaworks, Jan. 28): Both film versions were disappointing even with good actors like Colin Firth and Glenn Close in different movies. But the original theater production I saw in London with Lindsay Duncan and Alan Rickman remains one of the 20 best shows I have ever seen, no asterisks.

—Ragtime (Actors’ Playhouse, Jan. 28) David Arisco and company have long ago proven that if anyone can do justice to this glorious score and the epic sweep, it’s these folks. Prepare to have your breath taken away.

—Man of La Mancha (The Wick Theatre, Feb. 26) Simply one of the best musicals ever written, top to bottom from its score to its book. Almost impossible to ruin, it has the rarely-achieved potential to restore your faith in humanity to the point of tears.

—Bloody Bloody Andrew Jackson (Outré Theatre Company, May 1): This aggressively off-beat in-your-face rock musical is likely going to be a triumph or a disaster (depending in part on each audience member’s sensibility), but based on the imaginative staged concert reading we saw last season, it’ll be worth giving a shot.

—The Importance of Being Earnest (Thinking Cap Theatre, Nov. 12, 2015): One of the wittiest pieces of theater ever written. Director Nicole Stodard, a literature expert, proved with The Rover that she can maximize the comedy in even a 300-year-old play, so she’s halfway home with Oscar Wilde .