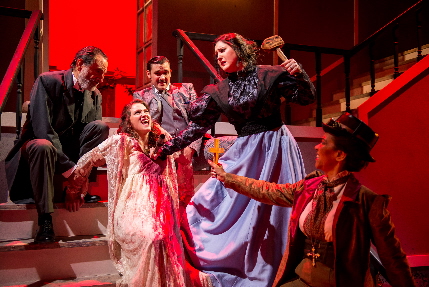 In Zoetic Stage’s world premiere deconstruction of Dracula, the vampire is a sexist pig (as are several men in the play to one degree or another). The protagonists are strong-willed proto-feminists. Together, they embody a society struggling on the cusp of change — re-envisioning what self-empowered women can and should be.

In the hands of some of the most skillful theatrical talents in the region, the first aspect is simultaneously enlightening and entertaining – a polemic wrapped in a hoot. Nobody’s victim, Mina Murray skewers the pompous male egos around her with razor-sharp ripostes. The commanding vampire killer Van Helsing is bemusedly accustomed to being looked at askance because she is a confident hyper-competent black woman.

But that second aspect of the macabre rarely works at all, if indeed it was even meant to. It’s hard to shudder at the chill of dread when the mood is punctured by a joke. For instance, at moments when you might begin to feel the stirrings of unease, Dracula utters one of those ludicrously iconic lines from the 1931 movie, such as “I never drink – wine.” Instead of their blood curdling, the audience laughs.

Undercutting the ominous atmosphere, the proceedings occur totally in a huge brightly-lit Barretts of Wimpole Street-type drawing room consistent with the 1927 stage version. Further, 90 percent of the action and the supernatural events occur off-stage and are related second-hand in exposition-heavy stories as the characters sit on well-upholstered furniture. To a 21st Century audience accustomed to almost tactile cinematic depictions of a vampire being staked in gore-o-rama, this falls flat and feels false. I think the last effective depiction of growing terror on stage was 1987’s The Woman In Black and before that a notable drought.

The only time that aspect works here is when we actually see and hear Renfield raving insanely at the edge of the stage between clamshell footlights and a blood red curtain. But then he eats a large black spider and the audience laughs again.

Using Dracula to explore themes completely different from Bram Stoker’s 1897 novel is not new; the Gothic horror classic has been reinvented several times including the 1977 Frank Langella-Edward Gorey stage and film versions, which emphasized Dracula’s power as sexual attraction.

But McKeever’s inventive spin invokes a satirically cartoonish vibe of a self-aware 21st Century resident looking back at turn-of-the-century patronizing paternalism. Men like Dracula saw themselves as women’s masters or like Mina’s fiancé Jonathan Harker who sees himself as her protector or like Dr. Seward who spouts his view of women as second-class human beings who are congenitally meant to keep their subservient place in the social order – and not threaten entitled male domination. Dracula describes his homeland as “A small piece of the Old World that desperately clings to its roots in the ever-changing turmoil of modernity.”

While McKeever depicts these men as benighted dinosaurs resisting change, especially the 500-year-old Dracula, the script subtly scolds the audience that the change is not as far along in 2018 as we might hope. Renfield says of his boss, “He has seen the future and it is not the future he wants.”

This Mina is not so much a suffragette champion of women’s rights as much as someone who simply knows her own worth. While trying to navigate an oppressive gender caste system, she tartly skewers their attitudes with absolutely delightful rejoinders.

A perfect example of both ends of the paradigm working well on their own but damaging each other can be seen here:

SEWARD (to Dracula): You’ll have to forgive Mina. She is the most progressive of young women. As such, she sometimes lacks the social graces expected by those of us of a certain age.
HARKER: What Mina meant to say —
MINA: I believe I was fairly clear in what I said and how I said it. Please forgive me, Count, if I, in any way, offended. But I find the boundaries of long dormant “social graces” to be somewhat limiting.
DRACULA: On the contrary, Miss Murray. I find you fascinating. And, to be perfectly frank, the sort of fresh blood I was speaking of earlier this evening.

The cast, including Carbonell winners, plays the dramatic scenes with commitment and the comical scenes of chauvinism with a barely perceptible wink.

As Mina, Zoetic mainstay Lindsey Corey once again shows her ability to inhabit the kind of multi-dimensional strong-willed heroine seen in her immigrant pole-dancing mother in Stripped to Jane in Tarzan the Musical. Her characters, who are often in some kind of physical, emotional or mental peril, simultaneously exude an Everywoman vulnerability as well as internal confidence.

Carlos Orizondo is a unique but valid choice for a riff on Dracula that you’ve not seen before. He does not have Bela Lugosi’s creepiness or Langella’s sex-on-a-stick quality. His lithe sculpted body is a bit slighter than imposing predecessors like Christopher Lee. But he is invested completely in the character without reservation, aided by a saturnine face, haunted eyes skulking under a hooded brow and coal black eyebrows. As McKeever and Meltzer want, he is the only person playing his role without a sideways nod to the silliness.

Karen Stephens adds another solid character to her career’s pantheon. Equipped with a bit of an accent, her Van Helsing is unfailingly self-assured. She imparts the most preposterous information in the tale with the utmost seriousness.

David Kwait, whose homeless man in Zoetic’s The Caretaker was a masterpiece, has the difficult role as the misogynistic sanitarium doctor Seward. Somehow, he utters the baldly now-offensive platitudes with absolute conviction, as if he was deigning to explain gravity to an aborigine. (“Your fiancée has a man’s brain. And that, in a woman, is an unfortunate thing. That is to say, she has some rather unusual notions about the role of women in today’s society.”)

Daniel Capote, also from The Caretaker, captures a young man who loves Mina, admires her, but like other well-meaning colleagues of his generation trying to adjust, he is more baffled and intrigued by her exotic attitude than actually respects her.

Caleb Scott, who was brilliant as the autistic man in Zoetic’s Dancing Lessons, makes Renfield’s insanity credible. Newcomer Isabella Lopez creates the sheltered doomed aristo Lucy and then later makes a believable switch to the maid Bridget with a just-off-the-boat Irish accent. Everyone adopts credible accents, coached by Rebecca Covey, including proper British pronunciations of the words “issue” and “appreciation.”

Marina Pareja designed the period perfect costumes including those high frilly collars for the women that not only hide bite marks, but communicate the buttoned up sexless role that society expected. Her strongest is the earth tones outfit for Van Helsing with a steampunk hat, trousers and riding boots. Matt Corey provided the requisite thunder, wolf cries and spooky sounds, as well as the echoing timbre when the count speaks.  A particularly smart touch is having a lovely young Dracula acolyte Francesca Rossi play a plaintive sounding violin whenever he appears or his invisible influence is present.

The set design, also by McKeever, is one of the drawbacks. There simply is nothing ominous or atmospheric about the palatial room. It does have a high sweeping staircase that Meltzer deftly uses for dramatic entrances and exits complete with French doors that open and close by themselves. Even the lighting by the usually flawless Rebecca Montero doesn’t create much of a scary environment.

The ultimate conflict, who will take on who and who will prevail, is obvious from the start, as is the final coda in which Mina makes a major life decision. But the dark and stormy night getting there is a pleasant journey through an imaginative exploration of a familiar tale.

(Full disclosure: This critic serves with McKeever and Stephens as a panelist on BCON television’s Spotlight on the Arts program.)

Dracula from Zoetic Stage as part of the Theater Up Close series performs through October 29 in the Carnival Studio Theater at the Arsht Center’s Ziff Ballet Opera House, 1300 Biscayne Boulevard, Miami. Performances are at 7:30 p.m. Wednesday-Saturday, 3 p.m. Saturday-Sunday. Tickets are $50-$60. Running time is 2 hours 20 minutes with one intermission. (305) 949-6722 or www.arshtcenter.org.