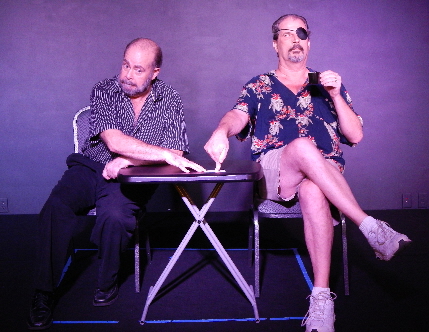 Michael H. Small enlists the services of a killer Harry Marsh in one of the short plays in No Fear of Flying / Photos by Carol Kassie

Fitzgerald facilely wrote “There are no second acts in American life” and Baby Boomers have spent their lives trying to prove him wrong.

Ellen Wacher’s Pigs Do Fly Productions opens its second season by, for and about people over 50 years old arguing that Fitzgerald was wrong with its newest anthology of playlets under the umbrella title No Fear of Flying.

Each is an unassuming comedy with a gentle message that tackles dilemmas recognizable to an audience who still hate Richard Nixon and who don’t recognize most musical groups on Saturday Night Live. Second act, hell; these protagonists want a third act in career or relationships.

Everyone is working hard to produce a pleasant little hoot that depends heavily on humor and poignancy resonating with people who once wore polyester even if they won’t admit it. If you thought Kanye West was being kind to give that McCartney guy a break, this show really isn’t meant for you and you’re likely to see the cracks and weaknesses in the material and the production.

As everyone is tired of hearing us say, writing short plays is just as difficult as writing a three-act epic, especially giving the feeling of a rounded satisfying experience in a brief stretch. While none of these entries are going into a theater hall of fame somewhere, their plots commendably have a beginning, middle and end plus character development. Each is mildy amusing, but all have a cute premise, end with some kind of twist and contain the required bittersweet message about pursuing that third act. Sometimes that moral feels organic to the piece, sometime its feels artificially inseminated.

The strongest piece is indeed about third acts, They Called It Teasing, written by Marj O’Neill-Butler, well directed by Elena Maria Garcia, and quite well performed by the cast. At a reunion probably 30 years after high school graduation, two boorish former jocks (Todd Caster and Harry Marsh) whose best years were back then, drunkenly start to tease a quiet well-dressed successful businessman (Michael H. Small) and a lovely former clarinet player in the school band (Beverly Blanchette). It’s a classic set up for every nerd’s revenge fantasy and you can know satisfying payback is nigh, but exactly what and how is a pleasurable surprise.

The curtain raiser, The European Plan by Charles West, is a straight-ahead comedy. It follows a nebbishy sitcom husband (Michael H. Small) plotting with a stone-face killer (Harry Marsh) to murder his nasally wife (Elissa Solomon) during a trip to Rome. Garcia, one of the region’s best actresses for physical comedy, directs Small to indulge in full baggy-pants burlesque mode with bug eyes and that vaudevillian voice resembling gravel dumping out of a truck somewhere in an outer borough of New York City.

Long Story by John Kane, directed by O’Neill-Butler, has a middle-aged actress (Donna Warfield) dissuaded from committing suicide by a mysterious older lady (Carol Sussman) who delivers her complicated titular back story to the actress – plus a bit of a surprise at the end.

There’s Still Time by Jeffrey Strausser, directed by O’Neill-Butler, depicts a middle-class drone (Small) wanting to take advantage of his golden years by pursuing his dream – becoming a stand-up comic – to the horror of his wife (Blanchette) and daughter (Solomon). A surprising amount of laughs gives way to the canned uplifting message of the title.

The Lie, written by Leeds, directed by O-Neill-Butler, has a wry premise: a country western star (Sussman) and her husband, a congressman (Caster), rail against the ageism that is sidelining them until they come up with a radical solution with the help of their friend (Warfield). What if they told the pop culture vultures that they were coming out of the closet?

Mitzi Has A Meltdown, written by McKeever, directed by O’Neill-Butler, depicts a 56-year-old woman (Solomon) loudly bemoaning the terrible news that she is about to become, gasp, a grandmother, an inescapable sign of her no longer being 48. She looks for solace from her sister (Warfield) and brother-in-law (Small).

Signals, a local premiere by Marv Siegel, directed by Garcia, closes the evening with two middle-aged woman (Warfield and Solomon) in a diner awaiting a computer-service double date. They come up with ever sillier escape signal code phrases for how to handle the various possibilities that their dates are not up to snuff. But the dates (Caster and Marsh) have a surprise for them.

McKeever’s and Leeds’ plays were commissioned by Pigs Do Fly Productions; the remaining five were chosen from almost 300 submissions – all read by a committee of six. The top 12 pieces were presented at two consecutive ‘cold readings’ at Books & Books in Coral Gables in August, and audience members were asked to vote for their favorites.

All of this is innocuous and cute if not terribly exciting, executed by all involved with various levels of success.