An Unusually Apropos 1776 For Our Times At PB Dramaworks 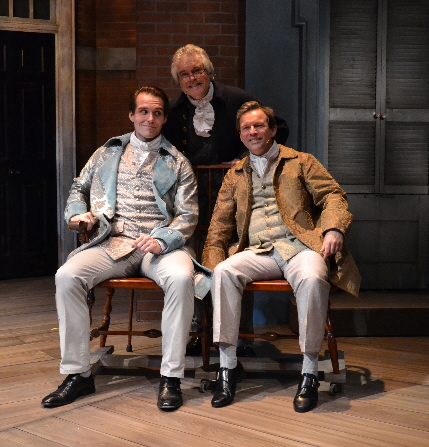 By Bill Hirschman
(This story also appears in Florida Weekly)

The current political climate has spurred Palm Beach Dramaworks to reinvent that July perennial musical 1776 to highlight the similarities between us and the Founding Fathers in its production July 1-24.

To begin with, beloved musical about the Continental Congress’ process to declare its independence from England will open with anxious Americans in 2016 looking for some insight from the past. Further, to underscore the need for mutual understanding, only 13 actors will be on stage, each playing a liberal supporter of independence and a conservative Loyalist.

“Why this now? We are in the most turbulent political climate in my lifetime,” said Producing Artistic Director William Hayes. “This is the year to do it.”

The 1969 musical is a surprisingly rousing, funny and moving piece centering on the creation of the Declaration of Independence, featuring Sherman Edwards’ infectious score, Peter Stone’s book (among the best ever written) and one of the most effective finales in the canon. It’s notable for the ability to build suspense for an event whose end everyone knows.

But the obstacle facing Dramaworks is the show’s scope, starting with its standard requirement of 13 major characters, an even larger number in the ensemble, and a 21-piece orchestra. That usually restricts it to community theaters, colleges and high schools.

Hayes said, “However, we can’t afford to do the 28 characters. We’d lose our shirt.” Director Clive Cholerton quipped, “And if we did, how could we even get them on our stage?”

So Cholerton and Hayes developed several ideas, first the doubling of roles, but with a purpose – to underscore the need for even-handed appreciation of others’ ideas.

“Just seven states are up for grabs (today) which is just evidence of how polarized we are and how set in our ways we are. We’ve gone through five different elections where states have not changed hands at all,” Cholerton said. People only tune in to news programs and social media feeds that reinforce their preconceived opinions.

Then there’s opening the show in 2016 with 13 people frustrated with the current political climate, trying to find clarity in the furor of the present (represented by sound and visual elements with no changes in the script) and who search backwards until they settle on 1776.

“There was no time more turbulent than then this period. We had crazy outrageous personalities debating such things as slavery,” Hayes said.

There are other twists: Further, some of the men, such as Congress President John Hancock, would be played by women. There are other changes, but the team is keeping the mum for the moment.

Dramaworks has presented well-received staged concert versions of musicals with live music for several years during the summer, many directed by Cholerton who did the same thing when he headed the Caldwell Theatre Company.

But the shows have become as complicated as they can without crossing into full productions. Further, Hayes wanted to ensure that first time visitors during the summer realize the scope and depth of Dramaworks’ aesthetic during the main season.

The show is unusually popular for something done so infrequently by professional companies, in part because of the film and the original cast album. In South Florida, the two major productions have been Broward Stage Door in 1999 (with a techno band that sounded like “Tubular Bells”) and Actors’ Playhouse in 2008.
But the original it was nominated for five Tony Awards and won three, including Best Musical. Roundabout Theatre Company in New York mounted a 1997 revival.

Opinions are split whether it is faithful to the facts or whether it strays too far for artistic reasons, but many stretches of dialogue are drawn directly from letters and speeches from the time. But it is scrupulously accurate in the Founding Fathers’ eerily prescient debates about states’ rights, about slavery, about the need for compromise among well-intentioned opponents in order to accomplish something.

Cholerton added, “We hope that the way we’re doing it, people will relate to it, have even more of a personal connection and understanding of the piece because now more than ever they get it.”