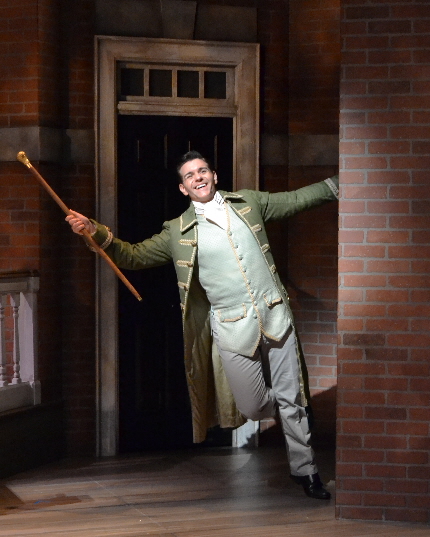 We have always been a country of rose-tinted myths from Davy Crockett at the Alamo to Mr. Smith Goes to Washington. But those legends are more than wishful thinking; they are prayerful expressions of who we want to see ourselves as and who we want to be. Those aspirations, far more than the reality, are the glory of the American spirit.

As a result, the musical 1776, a bit hokey, a bit broad, has somehow landed solidly all these years as something more than well-constructed light entertainment mixed with insightful reflections of our better selves.

That was before. In these terrible times of violence, deprivation and polarization, the resonances in Palm Beach Dramaworks’ imaginatively reinvented production are deafening. Amid the laugh lines, the dancing and the drama, there is a challenge to us across two and half centuries to deal with our current trials with the same virtues that our forefathers did.

In the current context, Dramaworks’ effective and affecting edition of the 1969 musical also elicits rare feelings in these cynical post-modern times: pride in being an American, pride in being the heirs to the people who founded this country.

While some may find it a bit too musical comedy-ish, Peter Stone’s superb script pointedly depicts protagonists as flawed human beings and Sherman Edwards’ score mixes bouncy comedy tunes such as “The Lees of Old Virginia” with the profound anti-war lament “Momma, Look Sharp.”

Dramaworks takes it a step further. Director Clive Cholerton and Producing Artistic Director William Hayes have, as they fondly repeat, deliver a 1776 like you’ve never seen before.

1776 normally requires a huge cast and large orchestra who wouldn’t fit on Dramaworks’ stage even if the company could afford it. But this marks the first time Dramaworks has gone beyond its usual concert version of musicals during the summer and opted for a full-fledged production.

So Cholerton and Hayes decided that while it would not scrimp on production values, it would do the show with 13 actors and five on-stage musicians.

The strategy was to cast everyone but Gary Cadwallader as John Adams in two and even three roles. Advancing their thematic conception of evenhandedly portraying partisans on both sides as earnest, honest people, most actors portray a pro-separation advocate and alternately a Tory loyalist. Actors slip unnoticed offstage where stage crews help them change costumes, only to reappear moments later.

This really should not work. People in the cast and crew privately expressed their doubts during rehearsals. Even Cholerton and Hayes were, at best, cautiously optimistic.

But it does. Truthfully, only one performer, Nicholas Richberg, really makes you forget the double casting as he inhabits the ebullient Richard Henry Lee and the sober smooth John Dickinson.

It doesn’t matter. Cholerton and Hayes embrace the brand of glorious artifice you can only find in theater. The magic trick is part of the point. In fact, characters often change costumes and personas on stage such as Laura Hodos donning Abigail Adams dress over John Hancock’s waistcoat in half-shadows stage left.

They also devised a framing device that sounds precious, but in fact, works quite well: The cast enters in modern dress representing a cross section of social-political-economic strata all glued to their Smartphones and tablets. They wander  awash in Sean Lawson’s cacophonous array of projections and news footage of Clinton, Trump, commentators, and clips of social unrest including the ironic Brexit events. Someone then tweets on screen, “It’s never been this bad.” The images respond by rolling backward in time through the decades of political scandals and infighting until we reach 1776 and we see Cadwallader’s modern day clothes stripped away to reveal a brocaded waistcoat.

1776 traces the bickering, deeply divided Continental Congress as it wrestles whether to rebel against Great Britain, crystallized by the writing and potential adoption of the Declaration of Independence.  While Stone takes some artistic license, he quotes liberally from actual correspondence among the principals and he faithfully captures the complex issues and the myriad multi-dimensional personalities.

Stone’s book, considered one of the best in the musical theater genre, masterfully sketches out all-too-familiar issues as a stalled deliberative body, the self-interest of the propertied class, slavery, on and on. Almost every observer has remarked at how Stone’s reiteration of the overwhelming odds makes an audience doubt the likelihood of events whose denouement they already know.

Cholerton, who has staged several concert musicals for Dramaworks and the Caldwell Theatre, has an inspired eye for staging with a score of unique grace notes. One way he has striven to give equal weight to both sides of the argument is to adopt a cinematically changing visual point of view. Several times, the cast rearranges pieces so the audience sees a scene from three different vantage points. This can get a bit belabored by the second act, but it’s a vibrant idea that keeps the show from seeming static.

One notable stroke is how he handles the famed finale which usually involves filling the stage with more than two dozen actors recreating the famous painting of the signing of the declaration as the toll of the Liberty Bell and a tidal musical crescendo. But with only 13 actors and five musicians, this won’t work. We won’t spoil it, but his solution is ingenious.

The cast features some of the cream of the region’s corps. Cadwallader has been a central Florida actor seen little down here, but has recently taken the post of director of education and community engagement at Dramaworks. Adams is a tougher role than it appears since he only has two real colors: the scowling impatient abrasive firebrand, and the heartfelt husband profoundly missing his wife. But he delivers both with passion and absolute credibility.

Allan Baker, seen intermittently at Actors Playhouse in Coral Gables, is an old hand at comedy, so his Benjamin Franklin is a mixture of jovial playfulness and self-effacing humor. But Baker adeptly switches gears portraying a wily politician and cool pragmatist whose wisdom rescues several situations.

Hodos, with that clarion clear voice, is fine as Hancock, but her Abigail is a blissful brew of adoration, independence and intelligence. Notably, her love duets with Cadwallader are deeply moving. Richberg, seen this season as Giorgio in Zoetic  Stage’s Passion, is a wonderfully daffy as the strutting, rutting Richard Henry Lee, but the epitome of cultured privilege as the principled Dickinson.

But the steal-the-show standout is Shane R. Tanner as the fiery Edward Rutledge whose attack on northern complicity in the slave trade “Molasses to Rum to Slaves” is the turning point of the show. Often, the song is erroneously performed full out from beginning to end. And certainly Tanner blows out the walls of the chamber as well as the auditorium. But he modulates and precisely controls that glorious baritone, swooping in and out of the simmering rage with angst, fury, regret, frustration and disdain. It is one of the best musical theater performances you will see this season.

Mallory Newbrough is a glowing Martha Jefferson in a sensual “He Plays the Violin,” a chastened young courier in the moving “Momma Look Sharp” and, we think, a dour George Washington.

There are no half-measures. Expert Musical Director Craig Ames melds the cast’s strong voices and somehow managed to make his small band fully inhabit the score, although those who adore the original cast album will miss the power of a 21-piece orchestra. But it’s a skilled combo including Dale Sandvold’s violin, Mark Ligonde on bass and trombone, the tireless Julie Jacobs on an array of percussion and Assistant Musical Director Dominic Raffa on the second keyboard that provides the required harp and harpsichord sounds. Ames also seems to have penned a jazzy unsettling contemporary accompaniment for the opening scene. Michelle Petrucci served as assistant director and choreographer.

House costume designer Brian O’Keefe has provided scores of evocative period wear. John D. Hall creates dozens of times, locations and moods on a single set with his lighting. Michael Amico, one of the finest set designers in regional theater, creates fluidly changing locations of brick, clapboard, weathered shutters and mobile balustrades to fit Cholerton’s cinematic vision. Brad Pawlak’s sound design is crystalline. All of this is marshalled by stage manager James Danford and enabled by an invisible backstage crew who deserve their own bow at curtain call.

For some, 1776 is a hoary musical dinosaur. For others, it’s a cherished memory in their theatergoing scrapbook. What Dramaworks has done is made it a fresh, painfully, really painfully relevant reminder of how we want to deal with the trials before us – with respect, compassion, compromise and conscience.