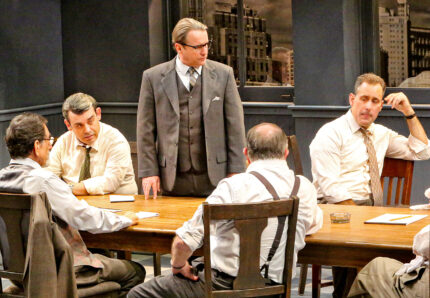 It’s the faces. A baker’s dozen actors we’ve seen in myriad roles over the past decade or more submerge themselves so deeply in their characters that they are nearly unrecognizable.

The intensity of the life and death stakes is reflected in those faces evaluating and reacting, those voices calm and outraged, the very body language as some lean forward to assess what is being argued, some turn their backs on the fray. The faces reflect fury, calm, patience, boredom, pride and shame in a crucible of clashing interpersonal relations.

The piece created as a 1954 teleplay and best known through the 1957 Henry Fonda film remains a tribute to the human decency and personal integrity of ordinary people upon which the inexplicable miracle of the jury system relies.

But Reginald Rose’s script directed by J. Barry Lewis completely acknowledges that amid one man’s courage to stand up against a group for what’s right, this cross-section of white male Americans in the Eisenhower Era also bring into the jury room racial prejudice, class discrimination, lazy thinking, straight-jacketed presumptions, and personal baggage that badly skews judgment.

Indeed, Rose’s clear-eyed assessment of the system cites the potential fallibilities of sausage-making justice relying on an imperfect half-hearted defense attorney and a shoddy, slipshod investigation/prosecution.

The play is set in 1954 in which 12 men enter a jury room to debate the case of a young man charged with knifing his father to death after an argument. It’s a blazing hot day and the fan in the room isn’t working. Over time, coats are discarded, ties loosened, sweat wiped off brows with handkerchiefs.

Nearly all of them are ready to vote guilty in this death penalty case. After all, there were people who testified they saw and heard the murder.

But while Juror 8 isn’t saying the defendant is innocent, he is troubled by some aspects of the case. Over 110 uninterrupted minutes he strives to stimulate a more detailed analysis of the case. Slowly he wins over one juror after another, who in turn persuade others in the room.

While Lewis deftly creates an increasingly tense atmosphere about the case itself and its resolution, he has forged a cast that is as concerned with depicting an array of human interactions.

The cast’s roles have no names, just character traits that on paper would lead lesser actors to simply portray some adjectives. But no one is creating caricatures or stereotypes. Instead, these one-dimensional qualities are absorbed into three-dimensional people.

The cast includes:
—Tim Altmeyer (PBD’s Night of the Iguana) as the foreman, a high school football coach trying to instill some order but losing patience with the protractive furor.
—Michael McKeever (PBD’s The People Downstairs) as a seemingly timid bank teller who finds courage to stand up to opposition.
— Gary Cadwallader (PBD’s director of education and community engagement, Arcadia) as a conservative stock broker focused on facts not emotions.
—Matthew W. Korinko, (a co-founder of Slow Burn Theatre Company) as a house painter who objects when an elderly juror is abused.
—John Leonard Thompson (PBD’s Equus, Long Day’s Journey Into Night) as a smart-aleck salesman more interested in getting out of the duty so he can attend a Yankees game.
—Dennis Creaghan, (PBD’s A Delicate Balance, Freud’s Last Session and Long Day’s Journey Into Night) as an older man who observes details about the witnesses and provides a senior’s insight into how aging might affect witnesses.
—David Kwiat, (PBD’s The People Downstairs) a naturalized American from Europe with a strong knowledge and belief in American values.
—Bruce Linser, (PBD’s The House of Blue Leaves) as an advertising executive just looking to get along.
—Cliff Goulet (PBD’s The Fantasticks) as the guard.

But especially impressive is the work of:
—Tom Wahl (PBD’s Billy and Me) exudes Juror 8’s Everyman decency and fair-mindedness. It is very difficult for the calm voice for reason to be the theatrical fulcrum in a drama filled with tempers and arguments, but Wahl succeeds.
—Rob Donohoe (Buried Child and Glengarry Glen Ross) has the tough job of making a racist-spouting bigot believable, but his penultimate tirade is a frightening depiction of an ordinary man certain of his obscene convictions.
—Jim Ballard (Doubt) inhabits a blue-collar man raised in a violent slum neighborhood who takes this duty seriously. Ballard perfectly depicts how the man’s opinion changes over the course of the play.

Saving the best for last, if best is a fair yardstick, is a welcome surprise.
William Hayes is producing artistic director and co-founder of Dramaworks. But in the company’s early days two decades ago, he acted in an acclaimed production of The Dresser, No Exit and The Zoo Story. Hayes is an affable person greeting his patrons opening nights with a winning smile.

That man is missing in this production. His bravura performance here as a father seeking a kind of second-hand revenge for the desertion of his own son is shattering. From the first moments, his scowling juror is quietly nursing a driving pain without calling attention to himself. His ire rises and retreats and rises again before settling into a scalding rage.

Victor A. Becker set the proceedings in a grey institutionalized room with tall windows looking over an urbanscape, with a clock ticking away the furor in real time and eventually a rainstorm. Character-revealing outfits were designed by Brian O’Keefe who ensured men sported suspenders, bow ties, period glasses and vests. Kirk Bookman’s lighting shifts subtly in part to indicate the dying afternoon turning to evening, but also to focus the audience’s attention.

Even if you have seen the film a dozen times, this live production with recognizable human beings wrestling with duty and justice a few feet away is well worth the experience.

To read an advance feature story about the production, click here.