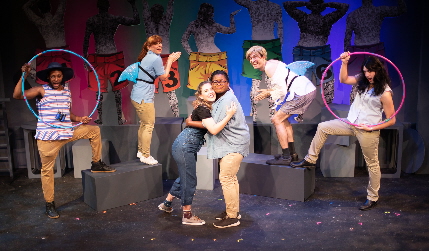 Despite Most Inclusive Program Yet, Duds Outnumber  Gems

Between plays, the actors’ upbeat folderol functions not unlike the rousing interactions of warm-up comics as they loosen up the live studio audience before Dr. Oz or Phil strides onstage with his telegenic tie and pearly smile. We’re supposed to enjoy them, sure, but not as much as the main act.

Therein lies the problem with the sixth installment of this franchise. Most of the plays, and there’s seven of them this year, are less memorable than their spirited introductions. Which isn’t to say that Shorts Gone Wild isn’t as progressive as ever; it is arguably the series’ most inclusive collection to date. There are plays about pansexual, transgender and intersex people and relationships, and the buzzwords of woke post-millennials—microaggressions, safe spaces, binary and the like—dutifully orient us in the zeitgeist.

But the plays—and, yes, the productions of them—that express these enlightened viewpoints are, more often than not, dull and inertial, overstaying even their diminutive durations. They either miss their marks comedically, with peculiarly written, awkwardly delivered laugh lines landing with quizzical thuds, or they attempt to scale dramatic walls that, in 10 minutes, nary exist.

But rather than dissect the misfires first, let’s start with the highlights. “Sleeping With the Fish” is a superbly acted neo-noir comedy from Joe Gulla that conjures sketch shows like SCTV and Kids in the Hall at their peaks. It’s 5 in the morning, on the deck of a Staten Island ferryboat, where Llaca and Levine play a pair of closeted mafiosi discussing their latest hit, while subtextually—and then quite textually—cataloguing their clandestine love life. The actors, complete with cigars, leather jackets, flat caps and Tony Soprano drawls, enjoy an infectious chemistry, and director John Manzelli’s patient pacing and marvelous comic timing draws humor even from the silences.

Among the other works of polish and promise, Michael Leeds’ “Triple Threat” imagines an audition for Oklahoma! in which an otherwise talented actress (Casey Sacco) has perhaps one too many assets for the role. The play relies a tad too heavily on theater in-jokes, but unlike some of the other plays in this program, it more than sticks the landing, ending on a nifty ironic kicker I didn’t see coming.

Sacco’s exuberant-ingénue persona from “Triple Threat” transforms deftly into a more prickly but fragile characterization in John Bavoso’s effective drama “Plus One.” Here, she’s the pansexual girlfriend of a more experienced, and more straightforward, lesbian (an excellent Christina Groom), who air their grievances, and react to their close-minded relatives, at the site of a potentially cataclysmic wedding. It’s hard to share the play’s waterworks having known the characters for all of seven or eight minutes, but the actors release them authentically and impressively, under tender direction from Manzelli.

The show’s other drama, E. Eric Thomas’s “When You Put it Like That It Just Sounds Ridiculous” plods with scant sense of narrative momentum, even with a gifted director like Gail Garrisan at the helm. It shuffles, not very fluidly, between two conversations: a transgender woman’s (Llaca) outpouring of affection for a cisgender friend (Levine), and her later reflections on such to her brother (Jacobs). It has the painfully earnest tenor of an after-school special, but Llaca gets a gold star for rocking some mountainously high heels.

Then there’s the two whiffs from playwright Rich Orloff—the tonally confused “Defender of the Tender Gender Bender,” in which even the bright prospect of Levine as a child hermaphrodite in a onesie cannot save—and “Crass Menagerie,” a loony riff on the Tennessee Williams play that is both unpersuasive as parody and unsuccessful as camp.

Which brings us to “What Happened at the Dolphin Show.” Like recent SGWs, the order of the six other plays is determined by random audience selection, but it likely always ends with this last, strange hurrah from Miranda Rose Hall, the only piece in this series employing the entire ensemble.

The subject is genuine; it’s about a pubescent girl’s (Sacco) first pangs of attraction, which happen to be directed toward members of the same sex, a fact that is so embarrassing that she can hardly be dragged to the beloved dolphin show at the Baltimore Aquarium, lest her gaze linger too long on the female trainers and audience members, and not the squeaking cetaceans.

But its lyrics—did we mention it’s a musical?—are of a middle-school level of sophistication, with choreography that isn’t much more elevated. If you wondered what Levine and Groom, among others, look like with dolphin fins, this production offers a vision for it, but as the show’s whiz-bang closer, it’s a distant cry from Summer Shorts’ recent “One More Time.”

The truth is: not much does happen at the dolphin show. It’s one of too many shorts in this program that fails to live up to the expectation of its title. The good news, of course, is that Island City Stage and City Theatre have a full year to come up with some stronger material for Shorts Gone Wild 7. Better get cracking.

Shorts Gone Wild 6 from Island City Stage and City Theatre runs through Aug. 26 at The Abyss Stage, 2304 N. Dixie Highway, Wilton Manors. Show times are Thursdays to Saturdays at 8 p.m. and Sundays at 5 p.m. Running time is an hour and 45 minutes with one 15-minute intermission. Tickets cost $35. Call (954) 519-2533 or visit islandcitystage.org.