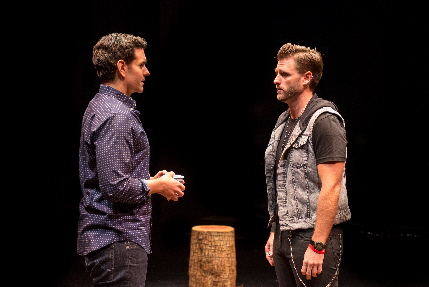 The unreliability of memory — and the resulting doubt and guilt — swirl like autumn leaves through Zoetic Stage’s production of The Great God Pan even though the play occurs in springtime.

It’s intentionally never made clear whether childhood sexual abuse actually occurred to the protagonist, which would provide a too-neat explanation for his stunted emotional development as an adult.

Because as with John Patrick Shanley’s Doubt, playwright Amy Herzog’s Pan seems less focused on what actually happened so much as the fallout of not knowing for sure what happened.

The unalloyed success of this production can be traced to the sensitive, subtle performances and Stuart Meltzer’s carefully-paced direction that helps the actors excavate deeply into their characters’ angst.

The play opens with a meeting between Jamie (Nicholas Richberg), a relatively successful journalist in New York City, and Frank (Matt Stabile), a childhood friend who is now a massage therapist. They have not spoken or seen each other in 25 years, since they were 7 years old, so they are unusually uncomfortable. They exchange small talk: Jamie is revealed a clean cut button-down type with a long-time girlfriend, Frank is in a serious gay relationship and sports a sleeve of tattoos and ear piercings.

Frank finally reveals his mission: His father has admitted to molesting him as a child and apparently other victims as well. Frank wants to prosecute and asks Jamie if he recalls being abused by Frank’s father.

Jamie says he does not recall and clumsily ends the meeting. And he is telling the truth: He really does not remember such an incident. But the question unsettles something ever so slightly. Jamie always has difficulty remembering things in general and he is dogged by this failing. Over the course of the play, he will wonder increasingly whether he has blotted out a painful memory.

It doesn’t help Jamie’s equanimity that his parents (David Kwiat and Angie Radosh) instantly act strangely when he mentions Frank’s question. They, too, don’t have any certain knowledge, but they clearly harbor unspoken fears whether something specific happened when Jamie was not even 5 years old that might have been their fault.

Seeing Jamie’s relationship with girlfriend Paige (Aubrey Shavonn Kessler) and his parents only fuels the audience’s speculation: He may be charming and affable, but he is a tad distant and inaccessible to everyone. He sidesteps his dad’s attempt to hug him and merely shakes his hand. He is not immediately supportive when Paige reveals she is pregnant after he has overcome sexual dysfunction and she has grappled with depression during their six-year relationship.

Like a detective, Jamie gingerly probes his loved ones and others such as Polly (Barbara Bradshaw), who babysat for Jamie and Frank and now suffers from dementia.

The doubt erodes at his balance, forcing Jamie and his circle to recognize that he has and is having significant trouble connecting with other people, for whatever reason.

The strength of Herzog’s play is that Jamie and we never know the truth. The damage is wreaked by the not knowing what happened and who deserves blame, if anyone.

Herzog is one of those hot up-and-coming playwrights with high profile successes such as the recent Belleville, After The Revolution (done at the Caldwell Theatre Company) and 4000 Miles (performed last season at GableStage). Neither of those last two scripts set this critic running for his dictionary of superlatives; I never even understood the point of 4000 Miles. Either this script is far better than those, or the Zoetic cast and Meltzer successfully mined Pan for far more substance. The only head-scratcher dramaturgically is the relevance of Paige’s two scenes counseling an anorexic played well by Mary Sansone.

This is a quiet play in which the characters are not especially conscious that a toxic river flows under the surface that they have submerged for decades and then they fight off acknowledging it for most of the show.

No one succeeds with this as well as Richberg, fresh off Zoetic productions of Assassins and All New People and GableStage’s Cock. He starts out so normal, so recognizable as the guy in the next cubicle. He and Meltzer calibrate in millimeters the insidious progress of the poison, making his transformation totally credible.

Most of the rest of the cast is on the same level. You don’t realize just how good Stabile is until you remember his completely different personas in The Timekeepers, The Last Schwartz and The Beebo Brinker Chronicles. But if you’re an acting student, study Bradshaw and Radosh who find tiny inflections that bring a verisimilitude to their characters. Watch Radosh especially who dives so deeply into the conflicted emotions of the mother. In one amazing moment, when Jamie off-handedly asks her about Frank’s allegation, her reaction is at first a bizarre silence as if someone just resurrected old pictures of her naked that she thought she tossed out, and then answers with a “hunh” that is more acceptance of something or confirmation of a long-held suspicion. This is all in the script, but it’s what she does with those moments that’s marvelous.

The uniform quality of these performances likely reflect on Meltzer’s guiding hand. It’s his pacing that is remarkable and his forcing the actors to dig deep into the characters’ complex psyches, requiring that the actors have a clear understanding of how every uncompleted sentence would have ended.

His physical staging of the first show in the round for Zoetic is flawless. He has Jamie sitting or standing at one of the compass points in a circle, but clearly Jamie is the sun around which the other characters revolve.

Jodi Dellaventura’s scenic design is simple but effective creating a dark forest of the heart: a circle of woodchips on the floor, four sawed off tree stumps for seating, wooden benches off to the side for the characters to remain watching the proceedings at all times, and large flat boards stretching from the floor to the ceiling representing tree trunks. Different locations are created through Herman G. Montero’s lighting. Aaron Merritt sets the mood before the action and between scenes by playing classical music live on a cello on stage, often Bach’s frequently used prelude “Suite No. 1 in G Major,” a lovely piece that echoes the deeply buried emotions of the characters.

Along with Fear Up Harsh, Assassins and Clark Gable Slept Here, this show completes a banner year for Zoetic which has earned a reputation for consistent quality across an eclectic slate of genres.