Peter Still Refuses To Grow Up, Thankfully, In Starcatcher 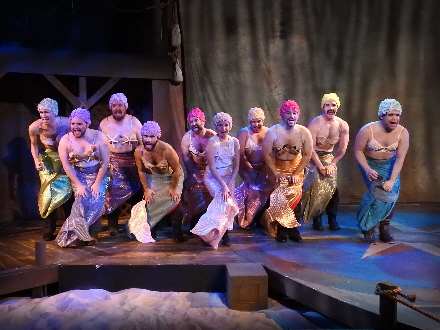 There are theater classics in which, no matter how skilled the company, the success of the production is never guaranteed because it means hitting a particularly elusive tone: say Our Town or Cyrano de Bergerac.

Then there are works that, assuming you have cast the show correctly with an energetic talented troupe led by an inventive director, almost always succeed and one which the audience welcomes each company’s unique riff no matter how often they’ve seen other editions.

A prime exhibit of the latter: Slow Burn Theatre Company’s rollicking race-down-the-hill production of Peter and the Starcatcher is a joyful hoot packed with more sight gags, puns, pratfalls, wordplay and even a bit of wistfulness than arguably any other recent work including the current The Play That Goes Wrong.

Paradoxically, this production races so fast that it’s hard to follow all the plot points (although you pick it all up eventually) and it is impossible to catch more than two-thirds of the jokes whizzing by, yet the show seems longer here than it has in other renditions. Other jokes are lost because of some actors’ mush mouth enunciation likely victimized by the speed of the delivery.

But those are quibbles. Director/choreographer Patrick Fitzwater and his gloriously wacky band celebrate every joke in Rick Elice’s script and luxuriate in opportunities to gild the lily with hundreds of show business bits from double-takes to scripted “ad libs.”

One character says, “I’m not going to split rabbits.” His assistant corrects, “Hairs.” Later, the island’s crocodile doesn’t swallow a clock, but a kitchen timer. Earlier, someone says something is “as elusive as a melody in a Phillip Glass opera.”

The 2009 play with music by Wayne Barker is a reimagining of the Peter Pan origin story based on the 2004 children’s novel by Ridley Pearson and Miami Herald columnist Dave Barry. Elice (Jersey Boys) intentionally jettisons every scrap of J.M. Barrie’s original (as does almost every other version) but makes playfully sly nods such as Neverland being the name of a ship transporting characters to the falbed island.

It’s difficult to summarize this narrative marked by a half-dozen plot turns a minute and the most exposition–heavy first act in theater history. You have one ship containing the independent self-assured 13-year-old Molly, three lost boys including one who has no name but will soon, and a mysterious treasure chest headed for southeast Asia. On another ship, her peer of the realm father has been taken captive by a pirate crew headed by the flamboyant Black Stache. Then a storm hits, everyone ends up on an island populated by cannibals and… and… okay, it’s… well, it’s not difficult to summarize, it’s impossible.

The broad slapstick will entertain children, such as a dozen grown men wearing faux mermaid tails, brassieres with sea shells and flowered bathing caps cavorting to Fitzwater’s choreography. But most of the humor is aimed at adults, and the play slips into brief meditations on the freedom inherent in childhood and the sad inevitability of growing up.

The story is told by a troupe of Victorian actors who share the narration in which someone gives a line and a colleague picks it up instantly with another line and so on in the manner of the RSC’s The Life and Adventures of Nicholas Nickleby. Even the leads are part of the ensemble most times.

But there are three leading roles with actors having a fine time: Jordon Armstrong as the winsome Boy Who Will Be Peter, and Krystal Millie Valdes as the confident and always earnest Molly.

And then there’s Clay Cartland.  We’ve waxed eloquently in praise about Cartland’s abilities from high comedy to drama, but always imbuing his characters with something extra; he actually made something of the thankless role this fall as the son in MNM Productions’ La Cage aux Folles.

But Black Stache is the kind of over-the-top scenery-chewing role that allows Cartland’s comic sensibilities free reign from verbal jousting to the physicality of falling over a treasure chest multiple times. Cartland joked on Facebook with actor Nicholas Richberg (who did a brilliant job in the Arsht Center’s production in 2014) that he planned to steal some of his performance. But Cartland’s Stache is his own creation, part gusto, part preening, part posing, part trying to hide his ineptness, and several other ingredients as well.

The rest of the cast explodes with the mischievous smile and boundless enthusiasm of folks just having a great time themselves and inviting the audience into the fun: Noah Levine as the gangly prissy nursemaid who falls in love with the bearded rough Ben Sandomir, Cameron Jordan whose tirelessly attentive Smee playing a ukulele while dressed as a siren, Matthew Korinko as the upstanding English peer and father to Molly, plus Andrew Rodriguez-Triana, Joseph Pino, Robert Fritz, Johnbarry Green and Corey Vega, all of whom join with the leads in inhabiting scores of characters.

The hundreds and hundreds of bits of business have been orchestrated by Fitzwater whose choreographic talent makes the show more fluid than some other editions. As the show demands, the production not only embraces but revels in theatricality so that ropes can become a ship’s cabin door or the roiling waves of the sea.

The set by Michael McClain is an appropriate patchwork of weathered boards and platforms including two performing islands embedded in the audience. The set is less busy and crammed with detritus than other productions, but this has to be moved later this season to the Aventura Arts & Cultural Center and Old School Square in Delray Beach.

Otherwise the creative team has labored hard and well, from Rick Pena’s threadbare patched costumes to Jose Santiago’s morphing lighting. But most impressive is Rich Szczublewski’s sound design, which incorporated 130 music tracks by Manny Schvartzman and 70 sound effects. Music director Anthony Campisi blended the ensemble to clearly sing those self-important English anthems of the period and the music hall numbers.

The whole thing swirls like an antique multi-colored toy top.