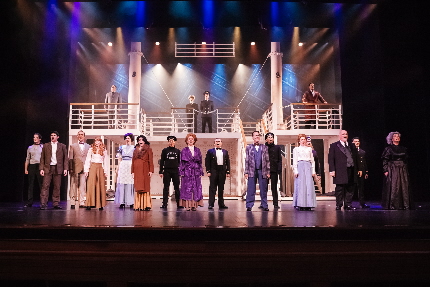 Along with West Side Story and Floyd Collins, Titanic is the rare musical about an inevitable pre-ordained tragedy. The opening number is an awe-filled celebration of Man’s ingenuity, spirit and determination, but in the finale the same song becomes a chastened hymn-like apologia for hubris.

The enduring genius of the 1997 Tony winner beautifully limned by Slow Burn Theatre Company is that while the dialogue rarely nods at what’s to come, Peter Stone’s book and Maury Yeston’s score rely on the audience viewing the initial paeans to progress and dreams with the knowledge that this optimistic vision entering the 20th Century will be swept away by fate, chance, Nature or the very God being prayed to.

The creative team harbors not a shred of cynicism, mocking or irony, but imbues the evening with a sad compassion. It does not attempt to answer anything, only to depict human qualities from grace to greed, sacrifice to cowardice, hope to despair, and above all, the precious nature of love.

And somewhere Stone and Yeston echo that lasting question in the darkness about the silence of God. How can God abandon these people who frequently invoke their faith early in the voyage, and then even as the waters close in on them? Threaded throughout are criticisms of corporate avarice at any cost and a savage spear stab in the guts of the inequities of the class system.

To be fair, not everyone is moved by the show. Many viewers are drawn into the personal stories of the passengers and crew, from the boiler room stoker to the wealthy elite to the hard-headed optimists in steerage who dream of a better life in America. But others in audiences fail to connect, perhaps because the procession of so many characters and their backstories don’t stick around long enough for patrons to cement their allegiance; they prefer the easy central focus of Kate and Leo in the film.

Additionally, as befitting a tragedy, while there are a few rousing numbers, the entire evening is saturated with a dark elegiac tone that will disappoint some people preferring Hairspray or Newsies. This critic will contend that it’s their loss because the melodic score soars on choruses of passion.

Although the Broadway version had more bells and whistles including a sinking ship, a 42-member cast and a full orchestra, Slow Burn has embraced a carefully-stripped down version from 2012, which depends on imaginative stagecraft and a tireless ensemble playing multiple roles to plant the illusion of scope. In the opening 23 minutes of the evening, the cast of 20 creates 63 characters.

The musical opens on sailing day with a cross-section of British and American passengers sharply divided into three classes, plus sailors, stewards, the ship’s captain, architect and owner — a microcosm of society. We are introduced one by one to individuals and couples, all in ecstasy at sailing on the maiden voyage of the largest moving object in history. In the galvanizing opening anthem nicknaming the vessel a “ship of dreams,” the invincible creation seems the embodiment of a bright promising future. Over and over, characters say with joy about prospects over the horizon, “It’s a new world.”

Of course, Stone and Yeston count on the audience’s dark veil of foreknowledge as the characters sing of their imminent goals: an eloping couple planning to marry, lower-classes lasses planning the enviable life of a ladies’ maid, the captain looking forward to retirement and his second-in-command anxious about taking over a ship.

Slow Burn’s reputation has so many actors wanting to be a part of their shows that the company now has more applicants than slots just for auditions. This pays off in shows because the stage is blessed with a wide array of proven talents, but also promising young performers.

To single out a few. Landon Summers (Phoebus in Slow Burn’s Hunchback last fall) is Barrett, who escaped the mines only to shovel coal here, but yearning to wed his beloved after the Titanic returns home. Leah Sessa is the hardware store owner’s middle-class wife breathlessly envying the glittering celebrity of the first class passengers. Slow Burn co-founder Matthew Korinko is the anxious architect; Andrew Rodriguez-Triana is the venal owner pressuring the captain to heedlessly put on more speed; Jordan Wolfe is the young telegrapher; Sunny Gay is the feisty irrepressible prole Kate McGowan; and Cameron Jordan is the proudly-composed steward to the first-class customers. 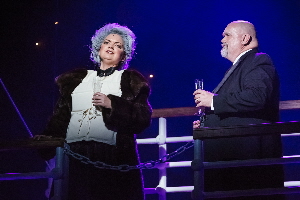 Special mention is due Ann Marie Olson and Troy J. Stanley as the ill-fated millionaires Isidor and Ida Straus who prefer to die together rather than be separated. Their abiding love is expressed in the most moving song in the show, “Still.”

But each member of the cast gets a musical number or a moment in the spotlight to prove their casting was well-placed, including Victor Souffrant, David Hyman, Justen Fox-Hall, Aaron Atkinson, Steven Fuentes, Sahid Arnaud Pabon, David Matthew Klein, Alexa Baray, Casey Sacco, Mallory Newbrough and James A. Skiba whose resonant baritone glows every time he sings.

Director Patrick Fitzwater helmed the voyage solidly although he had only a few opportunities to exercise his choreography talents. Music director Emmanuel Schvartzman once again molded the heartfelt vocal performances and led the powerful six-piece orchestra.

Sean McClelland’s set design erects a stationary two-tiered cross section of the ship with railings, steps and smokestacks, turned into many different parts of the ship through rolled on set pieces and thanks to Thomas M. Shorrock’s nimble lighting. The sound overseen by Rich Szczublewski did a fine job balancing the singers and the band, although the clarity of the words was not always crystalline.  Rick Pena produced scores and scores and scores of period-perfect costumes reflecting the wide range of socio-economic backgrounds.

If you open your heart to it, the sinking of the Titanic somehow results in a swelling tide of emotion and thought to carry you back to the 21st Century.

Titanic presented by Slow Burn Theatre Company through Feb. 5 at the Amaturo Theater, Broward Center For The Performing Arts, 201 SW 5th Ave., Fort Lauderdale. Performances are Thursday through Saturday at 7:30 p.m., and Sunday at 2 p.m. Running time about 2 hours 25 minutes including one intermission. Tickets are $47-$60. Call (954) 462-0222 for tickets, at www.browardcenter.org or #Ticketmaster.com; in person at Ticketmaster outlets or the Broward Center’s Auto Nation Box Office. Info at www.slowburntheatre.org 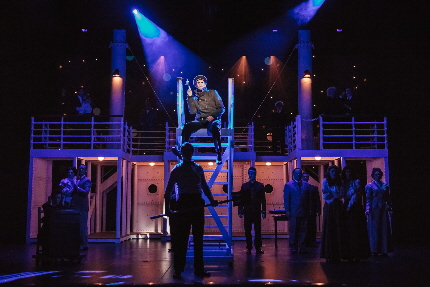