Once More With Feeling, A Local ‘Hair’ Cavorts At The Kravis 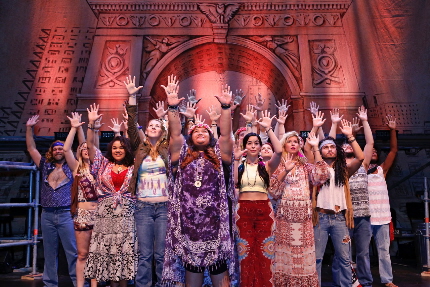 Hair never was and isn’t now accurate reportage on the 1968 counter-culture, let alone a bemused look at the quaint past, any more than Oklahoma was a faithful account of homesteading on the eve of statehood.

But what the raw material got right and MNM Productions’ engaging edition gets right at the Kravis Center is the infectious vitality, youthful optimism and the genuine sense of communal love.

Following its exemplary Side by Side by Sondheim in August, Hair further builds the fledgling company’s track record for no-excuses professional musicals using primarily local talent. This is no half-effort helmed by director Kimberly Dawn (KD) Smith and musical director Paul Reekie. The Rinker stage is filled with 22 committed performers, six live band members, scores of costumes and ever nimble lighting.

Hair’s be-who-you-want-to-be vibe is evident from the moment Fo’i Meleah, looking like a Hawaiian queen, strolls through the aisle and onto the stage with a beatific smile and croons the pulsating opening of “Aquarius.”

The motley assemblage enters from all corners of the auditorium, welcoming the audience with palpable warmth. Immediately, the cast (none of whom were born at the time in question) delivers a sense of totally buying into the Hair ethos without a self-censoring for fear seeming quaint, without a shred of winking at the dated ingenuousness.

Our emcee who will hold the entire evening together is the ebullient Berger (played with glow and gusto by Mike Westrich) regaling us with gleefully and knowing nose-tweaking with sex, drugs and rock n’ roll.

Quickly we are introduced to the other members of his troika: his lovely girlfriend, the outspoken social protestor Sheila (Alexa Baray), and their roommate, the gentle introspective soul, Claude (Michael Scott Ross). Since almost everyone gets a quick solo or leads a number early on, we soon pick out another half-dozen members of the Tribe.

The evening depicts the live-and-let-live philosophy of young adults who deride conventional norms and embrace a permissive lifestyle precisely encompassed by the old saw “love, happiness and peace.” But Claude has received his draft notice and the encroaching shadow of Vietnam galvanizes the Tribe to protest the war and try to rescue Claude from imminent induction.

This description improperly implies that there is much if any structure to the show as it happily meanders through a haze of marijuana smoke toward an admittedly dark finale. The show has always bogged down a little in the middle of each act.

But Galt MacDermot’s score (he, incidentally, was an older jazzman not a hippie) remains unfailingly winning, and Gerome Ragni and James Rado’s nimble lyrics with their rapid-fire lists of cultural icons and catchphrases presages hip-hop. Their script is, well, a tad precious in 2016, but you have suspended your disbelief faced with far greater odds.

What all versions of the good-natured let-me-share-a-flower-with-you Hair are missing is the accompanying sense of anger and naiveté that imbued the period, plus the sad sense of evanescence of a movement that would soon fade.

But MNM’s production under Smith’s direction captures the joyfully irreverent rejection of standard 1960s value – especially hung up attitudes toward sex – and the growing specter of war. Smith has the cast sing the finale “Let The Sunshine In” not as some buoyant celebration, but as a gut-wrenching anguished prayer for human beings to let love dominate our world rather than war.

I have hazy memories of the original Broadway production around 1972, not the original 1967 Public Theatre one. The 2009 revival and subsequent national tour directed by Diane Paulus was solidly constructed and performed, yet it was such polished “Broadway” that it undercut the scruffy DIY vibe that makes Smith’s product more of a joy to watch.

As a director, Smith infuses in her cast the appropriate spirit and molds the disparate group into a close community. Her physical staging and choreography will appear to the layman to be loose and inspired by the moment, but a closer look shows most of it is carefully plotted. It’s rare you see a locally produced show with gyrating bodies swirling around every inch of the stage,

Her leads embrace their roles unreservedly. Westrich has become a leading musical theater talent in the region because of his warm engaging voice and his deep investment in whatever role he is given especially this self-described “psychedelic teddy bear.”

Baray’s earnest Sheila seems the kind of nurturing earth mother that any red-blooded American male would like to be mothered by. But she has a decent but not quite wide-ranging enouhgh voice to deliver the plaintive and deceptively rangy “Easy To Be Hard” and but she gives a full-throated lead to the uplifting “Good Morning, Starshine.”

Ross has done only a few roles locally, but his Claude is the character you remember. Tall, a little gangly and blessed with a gentle moon face, his Claude is perhaps the most lovable of the flower children. Yet angst roils under this Claude’s exterior and Ross proclaims Claude anxiety with a clarion clear voice.

Everyone is local or have local connections. It pretty much disproves the quiet heresy that perhaps the musical theater bench here is a bit thin. Almost every member of the ensemble gets a solo or appears in a trio, so there’s nowhere for anyone to hide. Certainly, a few voices are thinner than you’d like, most aren’t ready to audition for the Alvin Ailey dancers any time soon. But each has something inarguably strong to show off and several do work here that exceeds anything we’ve seen them do before.

Standouts include Nicole Kinzel, consistently hilarious as the delightfully ditsy and very pregnant Jeanie who, garbed in a gas mask, sings about the polluted atmosphere.. Shenise Nunez as Crissy delivers the poignant ballad “Frank Mills” with a clear pure voice; the tall slender Elijah Word exudes charisma, especially on the in-your-face “Colored Spade” number; Pierre Tannous as Woof revels in his recitation of sex in “Sodomy,” and Emily Tarallo’s sinuous sensual dancing always glows even without benefit of a spotlight.

The rockin’ band is Reekie on keyboards, Sandi Hagood on drums, Seth Merlin on trumpet, Glen Rovinelli on reeds and percussion, Kevin Stewart on guitar and Mark Telesca on bass.

The setting of jungle gym of construction scaffolds draped in tie-died fabrics against a backdrop of Washington Square is designed by Cindy Taylor while Jayson Tomasheski provides the hallucinogenic array of lighting patterns. The delightful mismatched riot of colors and fabrics in the costuming (did we ever dress like that, did anyone?) is attributed to several people including producers Michael Lifshitz, and Marcie Gorman Althof, Damien Matherson, Kelly Johnson, and others. The only technical problems were microphones being switched on late and in some cases, the band threatening to drown out the singers.

Special gratitude is due co-producer Lifshitz for his genial but serious pre-show warning that ushers and actors have been authorized to temporarily confiscate cellphones visibly in use during the production other than the final curtain call when some audience members are invited to come up to the stage to dance. Regretfully, it did not work completely Sunday afternoon, but the no-tolerance attitude is a great start.

And yes, there is the famous Act One closing nude scene which, in keeping with tradition, is dimly lit and lasts about 11 seconds.

There’s a temptation to try to find current resonances and relevancy in Hair. It’s likely there with its themes of anti-war, racial harmony and non-judgmental attitude toward sex. But what really strikes a chord is the purity of this idealized vision of how the world could be. That it never really materialized, at least not for long, is a bittersweet reminder of that time of everybody’s youth when dreams seemed possible.

Hair runs through June 5 at the Rinker Playhouse at the Kravis Center for the Performing Arts, 701 Okeechobee Boulevard, West Palm Beach. Running time: 2 hours 15 minutes including one intermission. Performances are 7:30 p.m. Tuesday-Saturday; 1:30 p.m. Wednesday, Saturday and Sunday. Tickets are $45.  For more information, call (561) 832-7469 or visit kravis.org.