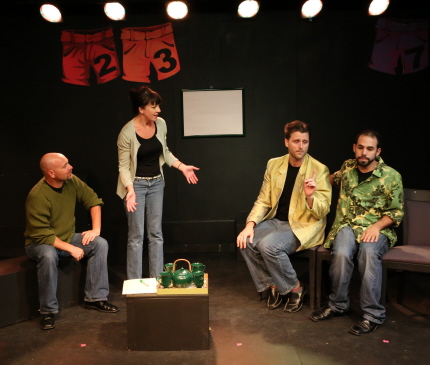 Don’t let the title, Shorts Gone Wild, conjure expectations of bare-breasted actresses and pantless actors. Sexuality, especially homosexuality,  does plays a role in most of the eight playlets, but it’s pretty tame stuff for South Florida.

Yet, this outing of light comedies with a live-and-let-live message is more consistently entertaining than some of City Theatre’s earlier forays into an alternative adults-only version of its venerable Summer Shorts program. None are outrageously hysterical but most deliver enough guffaws and chuckles to make the trip worthwhile.

A gently subversive vibe is in keeping with the first-time co-producer of the project, Island City Stage, just now finishing its first season of gaycentric theater in Empire Stage’s tiny venue in Fort Lauderdale. Several plays skewer the intractability of homophobes, notably Paul Rudnick’s indestructibly funny The Gay Agenda that has been presented by City Theatre twice before.

Unlike Summer Shorts which draws from a national pool of submissions, the plays here are most homegrown, underscoring the depth of the bench locally. The roster includes Kim Ehly (who wrote Baby GirL), Tony Finstrom (author of As Fate Would Have It, or The Famous Tragic History of Lady Jane Grey) Michael Leeds (Swinging On A Star), Mark Della Ventura (Small Membership) and Christopher Demos-Brown (Captiva) plus ringers Rudnick (Jeffrey) and Doug Wright (I Am My Own Wife).

To spice things up a tad, the order that the first seven plays are performed is based on audience members drawing numbers from a hat between each playlet. Pretty gutsy since you never know where the weaker and strong pieces will fall. This adds a gonzo frisson that emphasizes the unpredictability of live theater.

The grin of the night, especially for lovers of show tunes, is the spoofy A Lyrical Fable, written and directed by Leeds. It tells a literally rose-colored fairy tale of a small town girl coming to New York City to become a Rockette and finds love just as she’s about to give up on her dreams. Every single line, chirpily delivered with abandon by Fridh and her colleagues, is a lyric from about four dozen Broadway or pop songs. Appreciation of Leeds’ wackiness will wax and wane depending on your obsession with original cast albums; but for show queens, this is an unqualified hoot.

Two pieces have been done before in City Theatre’s Standing On Ceremony: The Gay Marriage Plays in June 2012.

One reprise is Wright’s On Facebook. Allegedly based on a real Facebook discussion thread, a homophobe and her buddy square off online with three gays and a lesbian. It’s mildly funny because of the performers’ zeal, but it’s just not as fully-fleshed out as some of the other pieces and it only lands when preached to a very sympathetic choir.

The second also appeared during the “regular” Summer Shorts this year at the Arsht Center: Rudnick’s The Gay Agenda. This time it’s Weakley as the pearl-bedecked Ohio homophobic housewife giving a cautionary speech to her fellow matrons at the Orchid Club or some such meeting. Her perkiness melts into increasing anxiety as she describes how her continued interaction with two “nice” gay men next door has led her to hear an ever more encroaching “gay” voice in her head that fires catty potshots at her “straight” world.

The odd man out tonally, Demos-Brown’s Mallory Square, is the most serious piece, the best constructed and by far the most satisfying. In it, straight parents Jen and Andy (Fridh and Quiroga) are hanging out with their buds, the gay couple Sean and Josh (Garranchan and Stabile). Their close friendship suddenly takes a left turn when the gay men ask Jen to use their sperm through artificial insemination to bear them a child. There are certainly some laughs, especially about how much personal information Jen has let the men know about, unbeknownst to Andy.

But Demos-Brown and director Ehly dig past questions about gay parenting and just how much you will do for your friends. They focus instead on the daunting challenge of parenthood as a gritty reality rather than some intellectualized dream. The father says you can’t just love a child, you have to be willing to sit behind them at the trial when they turn out to be the Unabomber.

Andy doesn’t question whether two gay men can be good fathers, but he wonders if the two men realize that parenthood isn’t all about love, but dread. Then he recounts a harrowing personal tale about the potential nightmare scenario all parents fear. Quiroga and Ehly make this speech the most affecting minutes of the whole evening.

Other pieces include Della Ventura’s gentle Unexpected, directed by Manzelli, in which two men outside a New Year’s Eve party (Stabile and Garranchan) tentatively explore the first stirrings of a relationship.

At the other end of the spectrum is the farcical The Happy Ones, written and directed by Ehly, in which Fridh invites over her new neighbor Benton, and puts the make on her with growing voracious aggression.

Read This Play, written by Leeds and directed by Rogow, is a mildly amusing riff on a would-be playwright kidnapping the artistic director of a theater company in hopes of getting his work read.

Mr. and Mr. Smith, written by Tony Finstrom and directed by Rogow, has the most inventive set-up and qualifies as the wackiest entry with a 1930s screwball comedy feel. A big movie star (Garranchan) wakes up in a small town hospital-and-veterinary center after a car accident with no memory of the previous hours. But apparently, after his film wrapped on location, his adoring stand-in (Stabile) kidnapped him and ferried him over state lines to Iowa for a surprise.  Add into the mix the nun (Weakley) who shuttles between recuperating human patients and four-footed ones in surgery; plus the star’s lawyer/agent played by Quiroga whose character just left the dentist’s office with a jaw full of Novacain, and finally, the star’s third-rate Latin actress girlfriend (Benton). Rogow drops in some nice little silent touches, such as having the nurse bring in a package of Milkbone treats for the human patient.

The production values are bare bones but inventive: the costume design by Peter A. Lovell garbs the cast members in shades of a single color assigned to each play.

Credit Manzelli and his City Theatre staff for producing an increasingly consistent level of quality in their script choices in recent years. We’ve seen many short play festivals across the country in the past couple of years with far more widely divergent quality.

A Chorus Line-like chorus line tries out for the Rockettes in Michael Leeds’ A Lyrical Fable.