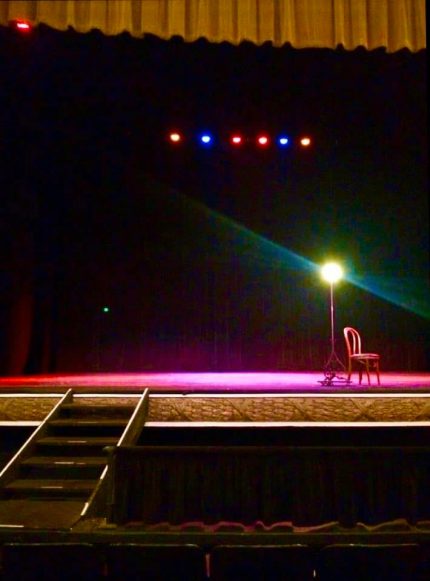 The ghost light may be lit across the South Florida theater scene, but nearly every troupe and venue are aggressively keeping the genre’s profile inescapable in a score of ways, some traditional, several imaginative, some charging a fee to keep the light bill paid, some for free to remind people, to quote Sondheim, “I’m still here.”

All are meant to keep their existence vibrantly in the consciousness of their patrons and artists who may not be able to be in the same room again for months in some optimists’ view, a year or even more in some darker estimates.

Happily, arts journalists are inundated with emails and Facebook postings of all these scores and scores of projects (albeit some with little advance notice). That means that (a) it is impossible to keep up with and (b) it is proof once again of the breadth and depth of the performing arts genre in the region.

They also subtly reflect different mindsets about expected reopening dates, fluctuating levels of frustration and fear. But throughout, the underlying message is that the need of the public to hear stories, and the artists’ need to tell them, has survived every possible disaster for 2,500 years. It may mutate or go into hibernation, but it will still be there in some form.

What follows are almost random snapshots of this moment, but know that almost any operation has something actively occurring, at least for the moment. You can learn more by going to the website of your favorites.

—South Florida has always been a crucible for new playwriting and indeed, some homegrown talents like Michael McKeever have started a new opus, as well as numerous young people better known locally as actors but who have announced on Facebook that always wanted to write their own piece. Several have tested the waters penning short pieces for Theatre Lab’s 24-Hour Theatre projects.

—In that vein, Palm Beach Dramaworks already had begun in January its Drama(in the)works, a series of weekly readings of evolving plays that could be viewed by the public. That in-person paradigm has changed to a free, virtual version through June 22 with live readings at 7 p.m. each Monday on Zoom. A few hours after the conclusion of the play, a recording of the presentation can be seen on PBD’s You Tube page through Thursday of the same week. The project involves the audience in helping determine which plays will be included in the 2021 New Year/New Plays Festival. The audience may contribute to a “talkback” by entering their question or comment in the Q&A section at the bottom center of their screen. The readings are free, but reservations are required because even online space is limited. To reserve a spot, visit palmbeachdramaworks.org. To view a recording of the week’s play, go to youtube.com/palmbeachdramaworks.

—Some theaters are simply moving their productions online. Fantasy Theatre Factory in Miami will mount its Short and Sweet collection of eight short comedies by South Florida playwrights at 7 p.m. Friday May 15th on its Facebook page, featuring Prom Night by Bruce Karp, Double Trouble by Arianna Rose, Last Two for the Interview by Marj O’Neill-Butler, Adrift by Donna Warfield, Viral Love by Philip Middleton Williams, Blame it on Barbie by Arianna Rose, Begging the Question by Phillip Middleton Williams, and Swamp Girl by Marj O’Neill-Butler.

—Few companies have videoed their productions for public use, but the Cuban Theater Digital Archive and Arca Images in Miami, the home of Pulitzer-winner Nilo Cruz, is offering a Spanish-language translation of his Hortensia and the Museum of Dreams at https://vimeo.com/409364274

—Florida Grand Opera had to postpone its Rigoletto, but it is offering renditions by emerging artists of the FGO Studio on FGO Go through its website: www.fgo.org and You Tube pages.

—Several companies are either producing their own classes or hosting another artist’s classes online, ranging from Miami New Drama’s two-day interactive master classes to simple lectures to one-on-one mentoring to children’s sessions. For instance, Slow Burn Theatre has an “Elder Arts” program for seniors with Kimmi Johnson teaching them signing and movement based on what the company hopes will be its next musical Footloose. Again, some are free, some have a tuition. Some you can simply visit on Facebook or Instagram, some require advanced registration even for some free events. Among others offering extensive lists of such projects (and this is not remotely complete): Arsht Center, Actors’ Playhouse, Broward Center, Lake Worth Playhouse and Main Street Players.

—Some troupes have drafted former actors, designers and staffers to be interviewed and sometimes to perform a song from a show they did at that venue. Some of these are live weekly events and most are archived on their Facebook or You Tube pages:
Juggerknot’s Miami Motel Stories has a character from the play, Mrs. Wade, interviewing actors, designers, fans and staff such as movement choreographer Octavio Campos (4 p.m. Tuesdays on You tube)
Slow Burn Theatre’s In The Green Room has the interview-performance project such as Tony Edgerton of their Jekyll & Hyde and A Christmas Story (6 p.m. Sundays on Facebook)
Zoetic Stage’s artistic director Stuart Meltzer hosts an intermittent Talking Through It, a 10-minute interview with artists like Gregg Weiner. (Facebook)
City Theatre is doing the same with its Small Talks series hosted by Artistic director Margaret Ledford (7:30 Thursday – and some Fridays– Facebook)
New City Players in Fort Lauderdale, which has maintained a growing community presence outside the stage itself over the years, has a program every weeknight at 9 p.m. on Instagram Live. It consists of informal conversations with a different theater artist singing songs, playing games “and getting wacky.”  It also has an ongoing NCP Virtual Lab. The next one is 7 p.m. Monday, May 18, a gathering for writers, actors and artists. Before the program, participants can write a one- to 10-minute play with the prompt “I wish I could just…” On Zoom, anyone can gather to hear the plays read. For more info and to register go to https://www.newcityplayers.org/lab.
The Broward Center has a live chat series beginning May 13 on its Facebook page with Jelani Remy who was starring as Eddie Kendricks in Ain’t Too Proud – The Life and Times of the Temptations on Broadway.

—Some theaters have an eye on the coming season by requesting video auditions, a technique that slowly had become more common in the region as artistic directors looked beyond the South Florida talent pool.  Currently, Pembroke Pines Theater of the Performing Arts, which began hiring Equity and non-Equity actors this season, is accepting video auditions through 5 p.m. May 15 for its productions of Cabaret slated to perform October 23 through Nov. 8, and for Something Rotten slated for March 19 through April 4, 2021. All roles are open and include color-blind casting. Details of what material is requested and how to submit is at http://www.pptopa.com/current/upcoming-auditions.html.

—Similarly, Actors’ Playhouse is conducting its annual Young Talent, Big Dreams competition with virtual auditions, with some viewable at https://www.youtube.com/user/YoungTalentBigDreams and with details at https://www.stayhome.miami/young-talent-big-dreams-goes-virtual/

—Several theaters are brainstorming the specific logistics of reopening. The Wick Theatre in Boca Raton, which had to cancel A Chorus Line after one performance, is emailing patrons with its plans to reopen Sept. 10 through Oct. 4 with the previously scheduled musical Nunsense starring Cindy Williams. The email states, “We are working on solving the issues that face the theatre and your safety and how and when to move forward. The following will hopefully address your questions. We are prepared to reopen and have invested in equipment and guidelines to insure your safety and enjoyment.”
Specifically, the email outlines:
—patrons will be required to wear a mask
— seating at 60 percent capacity, allowing several empty seats between parties
— one hour prior to every performance the entire building will undergo an antiviral disinfectant spray including all railings, seats, armrests, carpeting and seat
— audience members upon entering will be given a touch-free forehead thermometer reading.
—social distancing will be adhered to during intermission and restroom use
—refreshments will be served in the lobby and the auditorium to reduce lines
—the restaurant, donor suite and the after-show cabaret are cancelled until further notice.

—Similarly, Palm Beach Dramaworks’ staff has been brainstorming coping mechanisms but has no date in mind. Is weekly emailed update to subscribers noted it is planning “a safe and welcoming environment when at last we can reopen.” Among the steps:
—Hand sanitizer stations at every door
—Pending the recommendation of scientists and medical professionals, they likely will request or insist that patrons wear masks
—Considering purchasing an electrostatic cleaning system, the most effective disinfection method available, a chemical solution that’s sprayed on and gives 360-degree coverage to a targeted surface, finding its way into nooks and crannies and invisible areas.
—Planning to augment the HVAC system with bipolar ionization, an air purification system that will be installed into the ductwork and which, among other benefits, reduces bacteria and viruses.

—Some folks are trying to raise money by charging “admission” to filmed theater. For instance, the local GFour Productions is cyber-casting its perennial money-maker Menopause the Musical, streaming on demand from May 4. Purchasing a ticket for $19 gives you access to view one time within two weeks of your purchase date. Within 6 hours of the purchase, the patron will receive a custom link to view via email. Each ticket purchase is one link to view. Ten percent of all sales will be donated to The Actor’s Fund, which provides financial support to performing arts professionals. For more information click on https://tinyurl.com/y9udgk26 or email info@gfourproductions.com.